I went down to the boat planning to do a bit of painting and varnishing, but it was such a lovely day with a warm moderate breeze, and wind over neap tide that I felt I had to go for a sail instead, Its important sometimes to remember what the boat is actually for. We sailed out into the Thames Estuary within sight of, but not actually to, Herne Bay pier. It was in these waters that the pioneer aviator, Amy Johnson was lost on a cold January night in 1941. Johnson was tremendously famous in the 1930s being the first to achieve several long distance solo flights. When the war came, women were not allowed to fight the enemy, but experienced pilots such as her were employed delivering planes from factories to front line airfields. Its never been certain what happened to Amy: she may have got lost and run out of fuel, but more likely it seems that she was shot down by 'friendly fire' after she was challenged and failed to give the correct password. Although she had film star status during her lifetime not everyone had such a high opinion of her. Her contemporary and fellow pilot, the redoubtable Marion Wilberforce ( who died of old age, well into her 90s) is said to have thought Amy was a poor flier, prone to panic. 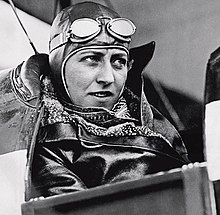 This month the booking opened for people to 'show an interest' in the Old Gaffers Round Britain cruise next year. There has been a very encouraging response at this early stage. Some of the entrants are old friends who went round in 2013, but so far I think Bonita is the only old boat entered. Last time there were 4 or 5 over 100 years old so it would be nice if there were a few more this time. In any boat theres quite a lot of preparation needed for this sort of cruise as the wear and tear on the gear ( and the skipper) is the equivalent of several seasons normal sailing. Time spent inspecting everything that can reasonably be inspected on a boat is rarely time wasted. The picture shows the belt driving the engine cooling water pump- this was still working perfectly well until I decided it was time I checked it over. 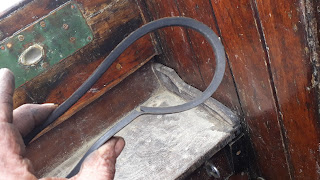 Posted by Bonita: Travels of a Victorian Yacht at 14:13 No comments:

Back in the river

Easter is a movable feast, its timing determined by the lunar calendar. Conveniently, this means the Easter public holidays always coincide with spring tides and therefore provide a suitable time to start the sailing season. With help from D we took Bonita out of Faversham creek to her mooring on the Swale on Easter Monday.
The winter covers keep the decks dry but she does accumulate quite a lot of dust and dirt after spending a few months by the quay. Last winter unfortunately the covers also provided a cosy home for a number of pigeons who left plenty of evidence of their occupation. The picture shows D working hard to clean the decks while I am steering the boat down the creek trying hard to keep carefully to the likely line of greatest depth (a useful concept known to geologists by the German word 'thalweg'- a term never found in nautical dictionaries). 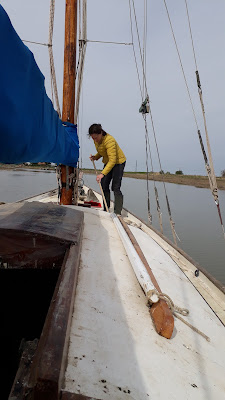 So is Bonita any better for her winter improvements? Speed under motor doesn't seem any better with the new folding propeller, but the chattering noise caused by the blades of the old propeller wobbling around in their housing has now gone, so no doubt that is a good thing. There's still quite a bit of cleaning, tidying and painting to be done, but its good to be afloat again.
Posted by Bonita: Travels of a Victorian Yacht at 00:46 No comments:

A nice shiny new propeller duly appeared and was paid for, and the challenge was to get it back in the boat. It didn't seem worthwhile to have her lifted out by the boatyard crane for a job which should only take a few minutes. So a couple of weeks ago I put the dinghy alongside her in the mud to try to get access. But, as we thought, the boat had settled down into the mud over the winter and the shaft log, that the propeller shaft fits into was nowhere to be seen. Digging away at the mud has little effect as it is so soft and liquid in Faversham Creek that its like shovelling soft porridge and the hole just fills up again.
So today I had a more determined effort. I shifted all the anchor chain and much of the ballast onto the starboard side deck. When Bonita floated on the spring high tide I rigged up a rope from the mast to a post ashore, and tightened this up as hard as I could. The net effect of all of this was to give her a gentle list of a few degrees to starboard, about as much as sailing in a gentle breeze. It didn't seem like much but it was enough. When the tide went out and she sat down in the mud, the shaft log was just visible. It was relatively simple to slide in the new shaft and propeller and connect it up to the engine.
Its important to keep a line attached to the new prop while installing it as the shaft and prop are heavy, slippery with mud and expensive! The mud is so soft that anything dropped in it is likely to never be seen again. I had been worrying about this job for a while so I was relieved to have got it done. It should be a few weeks before we take her out to her mooring on the Swale to start the new season, but all the remaining fitting out work should be (I hope) fairly straightforward. 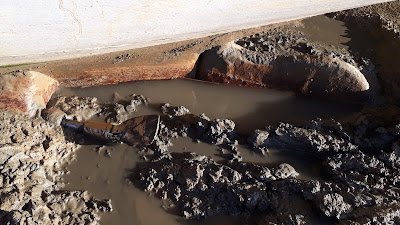 The shiny new propeller in among a lot of mud
Posted by Bonita: Travels of a Victorian Yacht at 23:06 No comments: 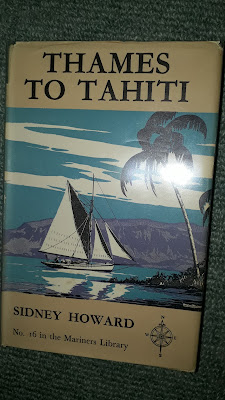 I had heard of this book but never seen it before: D managed to get me a copy for Christmas. It tells the story of another Crossfields boat -about 3 ft longer than Bonita- the 'Pacific Moon'. The cover picture shows an evocative scene of a Morecambe Bay prawner yacht in a tropical paradise. The book tells the story of a trip made in 1931/2. The boat itself was obviously strongly built and stood up well to the various adventures, although like many pre-war long distance sailors they had lots of trouble with the petrol engine, rotting ropes and sail repairs. The most dramatic moment comes when the crew falls overboard in mid ocean while the skipper is asleep. Fortunately he catches hold of the trailing log line, hauls himself back to the boat and calls out to the skipper to heave him back aboard. There are advantages in having a boat with low freeboard at times like this. Inevitably one is left wondering what happened to both author and boat after the adventure was over. It seems that Sidney Howard returned to a more peaceful life in England as a journalist and remarried. Pacific Moon was sold cheaply in Tahiti to an Argentinian yachtsman, and I have not been able to find any further record of her. So what of Bonita as we look forward to the New Year? She is still in her mud berth awaiting a new propellor. I have been strengthening the cockpit sides where the pull of the sheets had opened up cracks in the woodwork. I tried to cure this a few years ago using bits of copper sheet, but the problem hasnt gone away. This time I am using bronze plates with stainless steel inserts. As my father used to say, when you find yourself doing the same repair for the second or third time, its time to do the job properly.
Posted by Bonita: Travels of a Victorian Yacht at 10:34 No comments:

A couple of weeks ago D and I took advantage of a day of good weather, spring tides and no other duties that couldnt be rearranged to bring Bonita up Faversham creek for the winter. Remarkably, we managed the trip without going aground, although there were moments when we only had 0.1m or less under the keel. So what work is planned for this winter? For the last couple of years I have been worrying about the wear on the folding propellor. There doesnt seem to be any corrosion, but due to the metal wearing down there is quite a lot of lateral movement of the blades in their housing. How much movement is too much? How much wear can there be before there is a risk of a blade falling off? There are no easy answers to these questions, but I have previously had the experience of one blade coming off a folding propellor and its definitely a situation thats best avoided. Fortunately on that occasion we were able to sail back across the estuary to our mooring. Its not necessary to have her lifted ashore to take out the old propellor and shaft - working from the dinghy at low tide it can be removed as the boat sits in the soft mud, and a wooden bung hammered in to keep the water out. We will see if the new prop goes back as easily, as Bonita will probably settle down a bit deeper into the mud over the next few weeks. 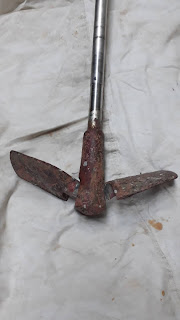 The picture shows the old propeller and shaft after being bought ashore and much hosing down. This is a Gori type of folding propellor that I bought in 1989, so I hope its replacement will last as long. When I looked at it in the comfort and security of home, the wear didnt seem quite so bad after all, but the man in the shop who makes his living selling propellors said it definitely needed replacement. Its a significant expense so I hope that maybe the boat will perform a bit better under engine with a brand new sleek propellor. Well, perhaps it will.
Posted by Bonita: Travels of a Victorian Yacht at 20:30 No comments: