This blog wins a prize!

For  the sailor based in the South East, January brings the London Boat Show. Here on damp and dismal winter days, in the cavernous expanse of the Excel centre we are encouraged to dream of those tropical seas and blue skies where there are always happy photogenic crews and fair winds. For the more practical, it is still an excellent place to compare different types of waterproof clothing or to browse through foreign charts, but the Boat Show has undoubtedly been undermined over the last few years by selling over the internet that needs no human contact. 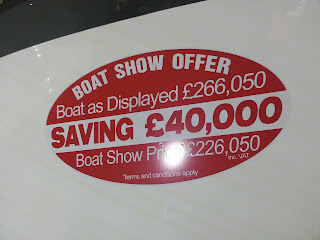 There are some astonishing savings to be made at the show, as this sign on a large gleaming motor cruiser indicates. However after careful thought we decided that we could save even more money by sticking with the old boat we already have.

On the last Saturday of the London Boat Show the Old Gaffers hold their AGM: this year in a pub by the West India Docks. I had not been to an OGA AGM before but it is a jolly affair, with many old friends and no more time spent on the formalities of the meeting than is absolutely necessary. We were presented with the Francis B Cooke trophy, an East Coast area trophy for the best log or blog. I thought there were some other good blogs, but maybe it was decided that it was Bonita's turn this year.

The picture shows John holding the Francis B Cooke trophy. It is a nicely made wooden half model of a small yacht, and the trophy has been won by a number of well known East Coast boats over the years. It is a lovely thing to own and put on display for a year. There is no indication on the trophy how old it is, which boat the model represents, or what, if any, connection there is with F B Cooke.

Francis B Cooke (1872 - 1974) was a well known and prolific writer of yachting books and articles. Unfortunately his books are now rarely seen and he is almost forgotten, but he was very influential in the popularising of small boat cruising in the first half of the twentieth century. He wrote largely about Thames Estuary sailing and was based in the river Crouch in Essex. Some people rather unkindly said that indeed he very rarely left the sheltered waters of the Crouch. He more or less gave up sailing at the age of 70, but continued to write almost until his death. Cooke was a great lover of small boats and the tidal waters of the Thames Estuary and its a pleasure to be awarded the trophy that is named after him.

Posted by Bonita: Travels of a Victorian Yacht at 22:56