Bonita is now starting on her 130th season.  In 1888, Queen Victoria had been on the throne for more than 50 years. Jack the Ripper was on the rampage in Whitechapel.  The prime minister was Robert Cecil, the Marquess of Salisbury. He was prime minister three times- taking over the leadership of the Conservatives after Disraeli's death - but is little remembered now.  Notably, as prime minister he once appointed his nephew to a very senior government position. There was surprise and comment as there were plenty of more qualified and more experienced candidates available outside his immediate family.

This gave rise to the phrase  'Bob's your uncle'  to mark the happy occasion when things have turned out perhaps better than might have been expected.  No doubt the Marquess would be dismayed that this might be the most durable legacy of his long political career.

We had an inaugural sail yesterday out into the Thames estuary and back in light winds to make sure all the gear had been set up right.  Poor Bonita is still waiting for her topsides to be painted and for her antifouling, but it should get done before too long. 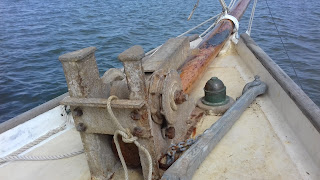 The picture shows Bonita's anchor winch. This is not original: at first she had a traditional handspike windlass as can often be seen on fishing smacks. It was slow and took up a lot of space on the foredeck.

During WWII my father was at one time in charge of an army engineering workshop. Some trainee welders needed an exercise in fabricating a complex steel structure from engineering drawings, so Dad produced a suitable design to test their skills. Once completed, the army had no further use for it and the winch found a more permanent home bolted down on Bonita's foredeck. It is an immensely robust piece of kit. Occasionally we take it off and dismantle it to get the pieces re-galvanised, last done in 2001.

And what is planed for this seasons sailing? Its difficult to do a major trip every year and I have not bought any more charts of foreign parts. Among the blogging  East Coast Old Gaffers, Robinetta and Bonify are setting out on major voyages. This year we hope to fit in some sailing in home waters.
Posted by Bonita: Travels of a Victorian Yacht at 19:12
Email ThisBlogThis!Share to TwitterShare to FacebookShare to Pinterest