Winter finds Bonita once again safely in her mudberth at Ironwharf boatyard in Faversham Creek.


A project that I have thinking about for a while is strengthening the counter . This takes a lot of twisting forces, particularly when running in heavy weather. Waves coming up astern lift the boat up by the counter and sometimes ( though not very often) the top of a wave will come aboard over the stern.

The trouble is that access to the counter is through a very small hatch, and unless I take up some of the deck, then any work has to be done through this hatch. 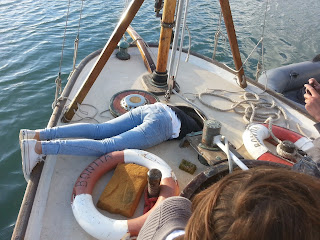 The picture shows Sophie (aged 13) inspecting the counter when she visited us in Gosport in 2013. An adult can just about get his or her head into the stern hatch, or one arm, but not both at once. Any work in the stern locker therefore has to be done unseen and with one hand.

I decided it would be a good idea to beef up the counter with internal copper reinforcing straps. The way to get a structure to better resist torsion (twisting forces) is to make it into a better tube, so  to be effective the straps need to be as far out towards the side of the boat as possible. 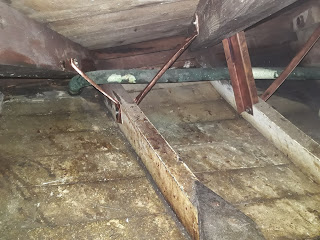 This photo was taken by lowering a camera into the counter and is a far better view than can be got by squinting through the hatch. It shows the port side with the ( green) exhast pipe going out through the side of the boat. There are now new shiny copper straps that can be seen bolted in place joining the frames to the deck beams.   It must help a bit.

I also thought it might be time for a new mizzen sail. For most of her life Bonita used to have cotton sails. Then one memorable and squally day in 1963 when sailing in the Thames estuary, both the foresail and jib blew out together. Dad decided it was time to switch to terylene and Bonita had a new set of sails for the 1964 season. The mizzen was the last survivor of these, made by the excellent but now sadly defunct firm of Paynes of Poole. 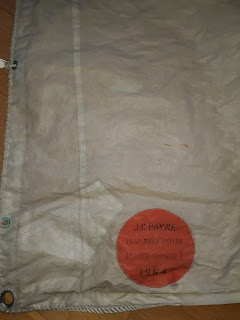 The mizzen has been frequently repaired and patched but had become rather frail. It split from luff to leach during a brisk sail last summer so I reluctantly decided that after more than 50 years it was time for a new one. I used to consider the mizzen as a light weather sail, but increasingly in a gust of wind we drop the mainsail and carry on under headsails and mizzen. So perhaps a new mizzen sail and a strengthened counter are both needed.

So what plans for next season? you may well ask. Its a bit uncertain at present, depending on availability of willing crew. However I have said we will take part in the Old Gaffers 55th anniverary rally in the Solent on August 16-18th. It should be a lively occasion and I hope we will be able to meet up with a few old friends.

Posted by Bonita: Travels of a Victorian Yacht at 13:58
Email ThisBlogThis!Share to TwitterShare to FacebookShare to Pinterest