This year we seem to have developed a luxurient growth of weed on Bonita's bottom. This may be due to unwise economy in antifouling paint, but no doubt the last few weeks of very hot summer weather have been a factor.  It discourages the growth if we can spend a week or two of the summer in fresh water, but this year that hasn't been possible. We have entered for the Swale Match next weekend and there's not much point in taking part with a dirty bottom. So yesterday I thought it was time for a scrub.

Fortunately there are a couple of posts on the beach on the Swale and it is a relatively simple matter to tie up alongside these at high water, and wait for the boat to dry out as the tide goes down. 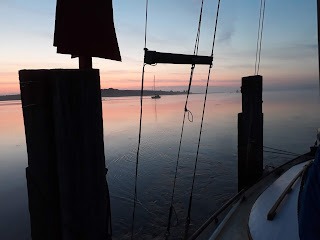 High water on Sunday was at 3.40 am. There are not many people about at that time.
The picture shows dawn with the sun just below the horizon,  Bonita tied up to the posts, and the ebb tide just beginning. The boat in the background is Calismarde. She has just returned from an adventurous cruise round Britain over the last two summers.

Although there were no other boats moving on the river at this early hour, there is still some activity. Over the Kentish marshes we could hear the rhythmic thump of some pop concert or party miles away and obviously still very active. Eventually however these sounds faded away to be replaced by the more usual rural sounds of birds and sheep.

The whole scrubbing off operation depends on having 12 hours of dry and settled weather and luckily that worked out OK. By mid-afternoon Bonita was back on her mooring with a clean bottom and a rather muddier owner.

Will the clean bottom make any difference when it comes to the race? We will have to see....
Posted by Bonita: Travels of a Victorian Yacht at 07:22