The last two year's Swale Matches were cancelled due to stormy weather, but we had a fine westerly breeze, force 3-4 for today's race.  It was nice to see the river full of traditional craft one again, although there seemed to be slightly fewer boats than usual, perhaps due to the pandemic. On Bonita we had 3 minus 1 crew members. Apart from myself, we had John, Allan and Toby. Toby is 4 and this was his first race under sail. He was very interested in everything that was happening and enjoyed pulling on ropes. He did however need someone older with him most of the time to make sure he didn't get hurt when the boat was heeling over or when we were tacking or gybing, so most of the time he fully occupies one adult. Toby did feel a bit queasy at one point, but this was easily cured with a chocolate biscuit. 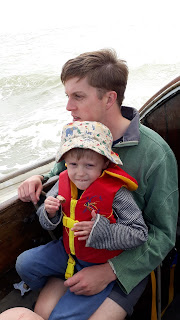 The race is over about 20 miles and takes us out into the Thames estuary off the North Kent coast. We had a fine race, with the topsail up the whole time, and no water on deck. Unfortunately there was a bit of weed on the boat as I hadn't had time to scrub her off properly, but nevertheless we overtook a few boats in our class.

I was interested to see that Blue Mermaid was present, who I had not seen before. She is  a new steel sailing barge, owned by the Sea Change Sailing Trust, and looks magnificent. She was commissioned in 2019, and is the first Thames sailing barge to be built since the 1930s, built on the lines of the original Blue Mermaid that was sunk by a mine in the 1940s. 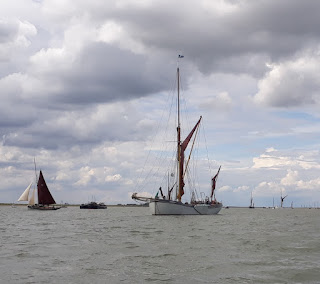 Remarkably, when it came to the prizegiving we found we had come second in our class!  We got the Whitstable Times Cup. Who knows how we might have done if I had been able to clean all the weed off the bottom?  Bonita has won this cup in the Swale Race twice before - in 1986 and 2008. On all three occasions Allan has been part of her winning crew - although he was very young indeed in 1986. Clearly we do better when we are able to call on the services of a younger crew.... 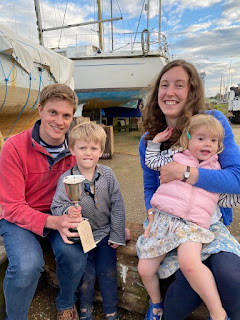 The Whitstable Times Cup
There are some good photos of this years race taken by Seamus Masters on the Kentish Sail Association instagram page. There is a lovely picture of Bonita approaching the finish line, which has attracted over a thousand 'likes'!
Posted by Bonita: Travels of a Victorian Yacht at 22:12
Email ThisBlogThis!Share to TwitterShare to FacebookShare to Pinterest