A couple of weeks ago Allan and I painted Bonita. It was one of those very hot dry days: we put her on the scrubbing dock at about 2.30am, and by 9am the job was done. Allan was able to go to do a days work while I waited for the rest of the morning for the incoming tide to refloat her.

Yesterday was the 50th Swale race, the first having been held in 1972. The Swale race is always fun with a large variety of traditional boats. Bonita has taken part in most of the 50 races with variable degrees of success, and sometimes getting a prize. We did once get the Seamanship trophy when D retrieved the big jib from the water after the halyard had parted as a result of hanging on to the sail too long.  Many improvements have been made to the gear and sails over the years in the hope of improving her performance in the Race.  Most years the Swale race is held in August and there  is often not really enough wind. This year we had a fine SW force 4-5 that made many boats take in a reef. We had a reef in the main for the manoevering at the start, but soon shook it out and sailed the race under full sail with some spray on deck - Bonita likes this sort of weather and does well in it - as do many other boats of similar size.  We had a tried and tested crew of Toby, Allan, D and Ant. We did not use any light weather sails, and the one boat that we did see hoisting a light jib on the downwind stretch seemed to be having so much trouble for so little reward that noone else was tempted to try the experiment. 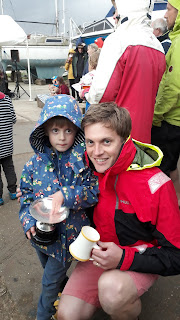 At the prizegiving we got the Sand End trophy for coming 3rd in our class. The picture shows Allan and Toby with our prized trophy.  Toby looks dressed for bad weather and indeed shortly after this photo was taken there was a tremendous rain squall, bringing the evenings festivities to a close and sending everyone running for shelter.

Posted by Bonita: Travels of a Victorian Yacht at 23:47