Out of the creek

John helped me take Bonita out of Faversham creek and onto her mooring today. There were blue skies but a brisk easterly wind with plenty of wind chill factor made us think that perhaps we were beginning the season a little early.  However the yard have started moving various sailing barges in and out of the floating docks, and though they are always very careful, I feel it is easier all round if Bonita is not in the way when these much larger boats are on the move. 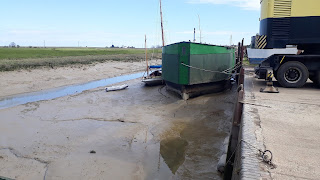 Waiting for the tide

The picture shows a glimpse of Bonita with her dinghy astern, winter covers off, spars in place and mainsail bent on, just waiting for the rising tide to float her off the mud.  It turned out to be not quite that simple: a comforting cushion of soft mud had accumulated all around her during the winter months. Also with high pressure over the North Sea, the high tide did not seem quite as high as I was expecting. However with the engine pushing and four of us on ropes pulling we eventually managed to carve a groove in the mud and get her out into deeper water in the middle of the creek. After that we managed to motor out to her mooring on the Swale without disturbing the mud any more.

So what of the new season? After last year when with all the restrictions Bonita didnt even get out of the Swale, we are hoping for something a bit more active this summer. With all the anxieties about Brexit and Covid, foreign trips are probably not a good idea, but we do hope to get in some coastal sailing.

Posted by Bonita: Travels of a Victorian Yacht at 22:37 No comments: