Sadly we were running out of time so we eased our way out of the marina at Pin Mill at first light and by the time we had got out of the river Orwell a moderate NE wind had developed. The persistant easterly winds day after day seem to be as much an unusual feature of this summer as the hot weather. We spent the day running with all sail up accross the Thames estuary and into the Medway, eventually picking up a buoy at Upnor in tbe last of the light. While we were off the Maplin sands we were fortunate to see the sailing barge EDME tacking up in the opposite direction, presumably to her home port of Brightlingsea. The sight of a championship barge making good speed to windward and thumping into the waves was very impressive. She soon disappeared into the distance. 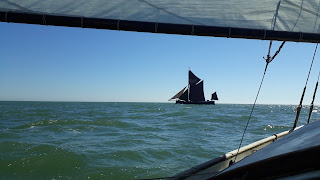 On Friday morning John had to leave us to help out at a friends wedding so we deposited him on the marina waiting pontoon at Chatham at 7am and within half an hour he was on the train to London. Allan and I then tacked out of the Medway, with a bit of engine assistance against the persistent NE wind and spring flood tide. By the evening we were back on our mooring on theSwale. During this hot summer there seems to be much more growth of seaweed and sea grass than usual, and there seems to be more of this on the Swale than some of the other rivers we visited, though I gather there is a lot in the Solent as well. We had only left our mooring for a short week but during that time it had collected a huge mass of waterlogged weed. We were quite unable to lift the buoy aboard due to the weight of weed until it had been cleared off with the boathook. We hope to get in a few more days sailing in cooler weather later in the year, and with luck resolve the IT issues to add a few pictures.
Posted by Bonita: Travels of a Victorian Yacht at 08:00 No comments:

We got up at first light and left Walton Backwaters as soon as we felt the tide was high enough. We had hoped to get to the Deben, but our progress against wind and tide was too slow: you have to get through the narrow entrance to the river Deben before high water, and it became clear we weren't going to make it. Sometimes the best answer to a frustrating sail is to redefine your objectives.

We decided to have a look at the rivers Stour and Orwell instead, so we eased off the sheets and had a fine sail with a moderate NE breeze. We anchored in the Stour for lunch then sailed up the very pretty Orwell as far as Pin Mill.

We had booked in for supper at the renowned Butt and Oyster pub and took a visitors mooring buoy off Pin Mill. However we found it was too close to the next buoy, and with a wind over tide situation only constant attention with the boathook prevented the boats colliding and causing damage. The man on the next boat sounded apprehensive. It would have been a long row to the pub. So we dropped our (free) visitors mooring and instead took a berth at the nearby Woolverstone marina. We were still able to get to the pub on time - packed out on a Wednesday evening.

Coming into the marina Bonita was ably helmed by Allan - more challenging than usual as the new propeller doesn't seem to have the same power the old one had. While this is an annoying problem that needs to be fixed, it is good to have discovered it early when it can, I hope, be fixed relatively easily.

Posted by Bonita: Travels of a Victorian Yacht at 22:21 1 comment:

The recent very hot weather brings its own problems for wooden boats. Below the waterline the weed grows more luxuriently and there is the worry that various types of destructive worm might set up home in the wood. Above the waterline there is the concern that the heat will cause the planking to dry out excessively and shrink. A berth on a swinging mooring is a definite advantage here as the boat swings round with the tide rather than having the sun always on the same side. We are also fortunate that local owners of various high powered craft like to travel at speed through the lines of moored boats on hot sunny days. Usefully this helps to keep the topsides moist. I keep looking forward to the time when diminishing commitments in life ashore will give more time for sailing. That time is still to come. However with John and Allan we have managed to get a few days sailing in local waters. On Monday we sailed accros the estuary against a light NE wind and ended up in Brightlingsea. The most interesting part of Brightlingsea is the river where there are a number of old fishing smacks in various stages of decay and preservation from the immaculate to the barely afloat. The size and strength of all the gear on these boats is most impressive and makes you respect the fishermen who sailed them in all weathers.

Little has changed in Brightlingsea since our last visit several years ago. Getting a meal  can be a challenge as the eateries confidently recommended by the locals always seem to be closed. Eventually we had a fine meal in the Indian restaurant, as we have on several previous visits.

Today we left in misty weather and had a gentle sail against a light easterly wind to the magical Walton Backwaters. We sailed in over the sands an hour or so before LW neap tides with only about 1 m under the keel, which was a bit concerning. However we anchored in deeper water off Stone point, where we took advantage of one of the hottest days of the year by swimming ashore from the boat. We are miles from any civilisation here so had supper on the boat. No photos today due to poor internet access: - will try to do better tomorrow.

Posted by Bonita: Travels of a Victorian Yacht at 19:16 No comments: