Bonita is now floating peacefully in the welcoming muddy ooze of Faversham creek, snug under her winter covers.  I cannot understand why so many owners of wooden boats have them craned out every winter: wallowing in soft smelly mud is so much better for the wood and stops it drying out. The smell of the mud (so evocative to those who love the tidal Thames, but for others perhaps an acquired taste)  is caused by lack of oxygen in the ooze which reduces marine growth and preserves the wood. 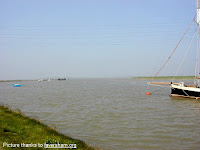 At present work outside has been slightly discouraged by brisk northerly winds and flurries of snow, but there is still  much to be done inside overhauling the gear.
There are hundreds of separate components that make a boat safe and seaworthy, and on an old boat at any one time many of them are partially worn out.  Minor running repairs are an integral part of any cruise.  Only people who buy a new boat  have the luxury of having everything new at once.  Most of Bonita's gear is between one and thirty years old.  Now is the time to worry about what I should be worrying about.
There is also the little matter of the crew. While Bonita can be sailed single handed, manoeuvring under engine is always an adventure and I would not wish to enter a modern marina without a skilled crew.  Admiring glances from the owners of expensive 21st century yachts can quickly turn to outright hostility when things go wrong. And with a long bowsprit things can go very wrong indeed.

Fortunately I have had lots of offers of help from family and friends, and I am trying to spread them out evenly through the summer.  I just hope that the London (and Canada) based friends who have happily agreed to join ship at some remote harbour in the north of Scotland know what sort of journey they have committed themselves to.
Posted by Bonita: Travels of a Victorian Yacht at 13:30
Email ThisBlogThis!Share to TwitterShare to FacebookShare to Pinterest