Bonita's Round Britain blog was an experiment for us, we had no idea who would read it or whether we would be able to maintain our aim of daily updates. As it turned out there was no shortage of interesting experiences to comment on but posting the blog entries daily was sometimes challenging, especially in remote locations such as around Scotland where we often had little mobile phone coverage.

Readership of the blog grew as we progressed and it was noticeable that we had more viewers every time Bonita was mentioned on the OGA's Sailing By website. Below are a few details about who's been reading what, and from where.


So what were the totals?

As of today the blog has been read by a total of  22,360 page viewers.
That's a lot of support - so many thanks to all our readers.
Of those page views, the top 4 posts were:

Where were the blog readers?

Well, the stats are shown below, and there are some unexpected countries, we seem to have a particularly loyal following in Russia. 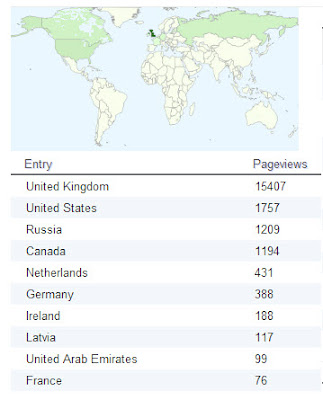 How did readers find us?

The top four referring sites (i.e. where someone clicked to get to the blog) were:

Bonita's blog was just one of a number of RBC blogs, links to eight of the others we have enjoyed following are on this blog's links section. All the blogs had their own distinct character - which is no surprise when you consider the individuality of the RBC boats and their owners. We hope that our joint blogging effort has done something to spread the message of the ability of our historic yachts and the joy and delight they bring to a wider audience.

Posted by Bonita: Travels of a Victorian Yacht at 16:23
Email ThisBlogThis!Share to TwitterShare to FacebookShare to Pinterest