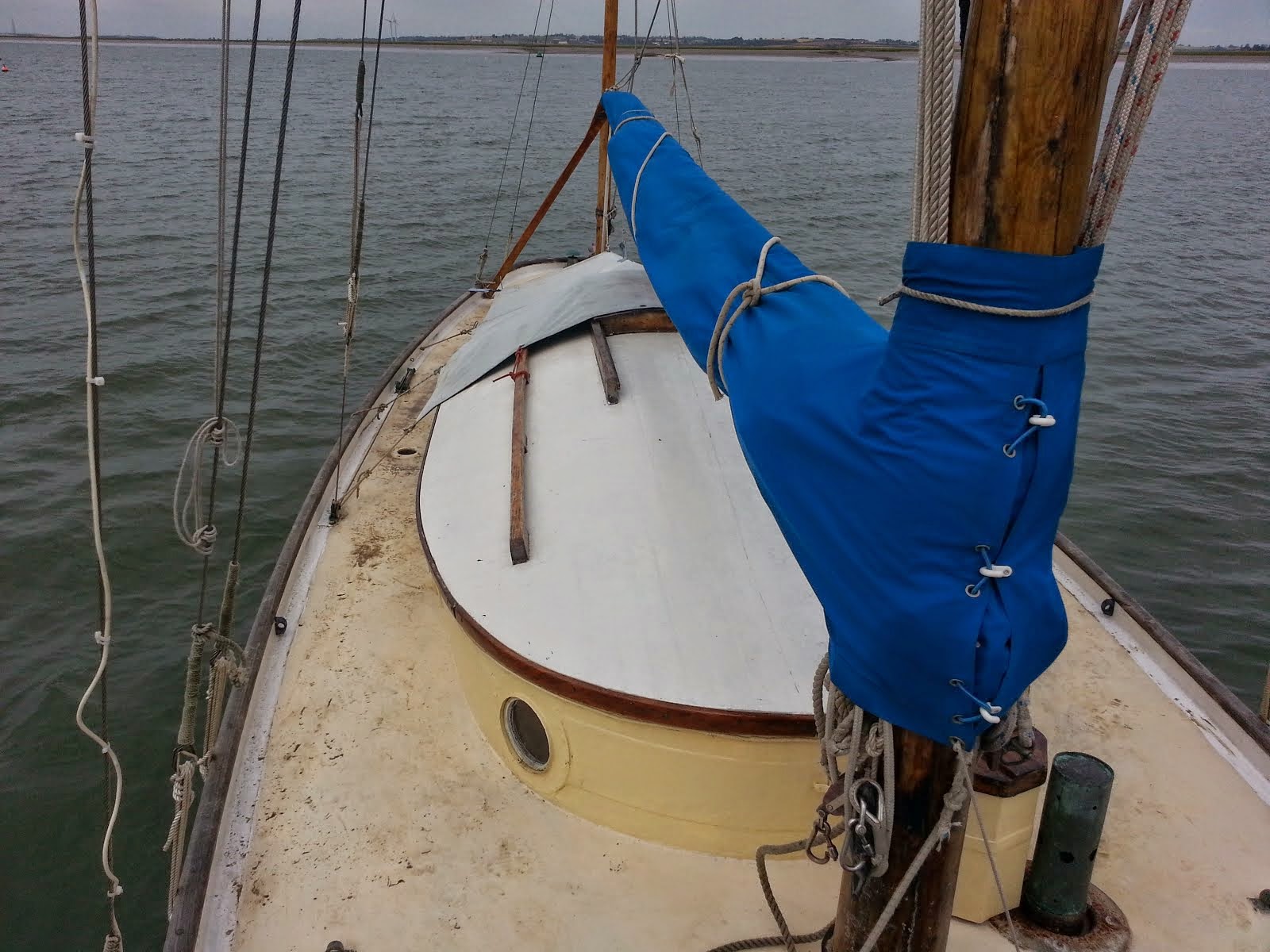 Anxious and faithful followers of Bonita's blog may be wondering what the old lady is doing this year. Well, not very much so far.  However we are planning to cross the North Sea later this month to join the Dutch Old Gaffers who are celebrating their 10th anniversary. They are planning a cruise through the Dutch canals from the south to the north of the country.  Other East coast gaffers have been rather more active than Bonita: I have been enviously reading the blogs of Witch and Robinetta, both of which have done the long journey up to the North of Scotland this summer.

Inevitably Bonita needed quite a lot of cleaning and tidying during the winter. I cleaned out the fuel tank which had accumulated about 2-3 cm of sludge in the bottom. I revised and I hope improved the mainsail reefing gear.  Also a bit of carpentry was needed on the cabin sides. Bonita's cabin is unusual in wooden boats, having a double curved 'shell-back' cabin top fastened to the rounded cabin coaming. This arrangement looks lovely but is structurally weak, which is why most wooden boats have a sensible rectangular cabin and a plywood roof curved in one plane only. My father did a lot of work to strengthen the cabin sides over the years with copper and extra bronze fastenings, and I have continued the process using stainless steel.

Fitting out for a cruise is always a busy and interesting process with all the many components that a boat needs - from antifouling paint to insurance with much else in between- all coming together just in time. This year I also decided I should get some certificates. I learnt mostly from my own and other peoples mistakes and have never had any certificates or qualifications in yachting. The last time we went to Holland -several years ago- they didn't seem to be needed. I was concerned that today this sort of optimistic attitude maybe isn't good enough, and on the inland waterways we could run into trouble if we can't produce the right papers at the right time. Therefore  my friend Geoff Jones and I spent a pleasant morning motoring with a little sailing in the river Medway, and we persuaded an examiner that we were competent. We both now have an International Certificate of Competency that we can show to anyone who suggests we don't know what we are doing.

At present the plan is to assemble a sturdy all-weather crew and, if the prospects look reasonable, to set out for the eastern horizon on Friday 25 July.

Posted by Bonita: Travels of a Victorian Yacht at 21:53