It wasn't chaos when we left Scheveningen but there was quite a lot of congestion as several boats left at once and there isn't much manoevering space. We didn't leave until nearly lunchtime as the wind was SW at first.
We would prefer to go straight back to the Thames but the winds have been persistently SW or Westerly with the possibility of strong winds - force 6 to 7 - forecast. That sort of thing is best avoided in an elderly boat on a prolonged passage in open water.

So today we sailed a few miles down the coast. The first picture shows us off the Hook of Holland where the immense Europoort has been built on a huge expanse of reclaimed land jutting out from the old coastline. 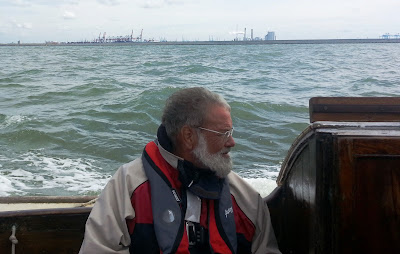 In the evening we came to the lock at the Haringvliet. This is a deep inlet that is 800 years old - it is recorded that it was formed as a result of flooding in 1216. Since then this area has been prone to flooding - as has much of Holland. There was a disastrous storm surge here in 1953 when there were floods on the east coast of England as well. As a result of this, the Dutch devised the Delta scheme, consisting of large barriers and sea walls to permanently remove the risk of flooding that had beem such a feature of Dutch life throughout history. The second picture shows the huge barrier across the Haringvliet. There are gates in the barrier to allow tidal flow but this is now completely under control. 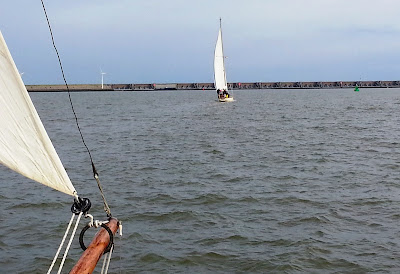 The Dutch are not afraid to think big when it comes to engineering schemes and the scale of  some of projects we have seen is most impressive.

This evening we are in Stellendam, just inside the Haringvliet barrier. We can carry on south through the inland waterways if that seems the better option tomorrow.
Posted by Bonita: Travels of a Victorian Yacht at 07:21
Email ThisBlogThis!Share to TwitterShare to FacebookShare to Pinterest