Bonita was craned back into the creek at the beginning of the week. Worryingly she often leaks a bit after being lifted back, probably as the hull must distort a bit while propped up ashore and also while hanging in the crane slings. However the leaks usually dry up in a few days. No doubt the tenacious Faversham creek mud, which seems to get everywhere, helps in this process. We will keep Bonita in the mud for a few more days to let things settle before taking her out to her mooring in the river.

Yesterday we reattached the rigging to the mast and had it lifted back into the boat. Its customary to put one or more copper coins under the base of the mast before it goes back in. Some purists would say that the date on the coin should be the year the boat was built, but with a Victorian boat this seems an unnecessary complication. Putting coins under the mast is a very ancient tradition and is supposed to bring good luck.  Archaeologists  excavating Roman ships have found coins placed under the heel of the mast by the original builders. 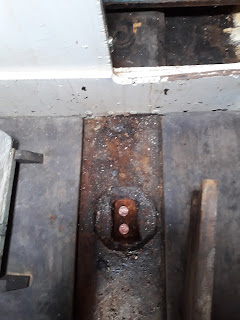 The reason for this ritual is not hard to see. The base of the mast sits in a mortice in the keel and any water collecting there cannot drain away. The copper salts from the coin will help inhibit the fungus that causes wood rot. While the coins themselves may or may not bring good luck, clearly any rot that develops at the base of the mast is very likely to bring bad luck.

Owners of boats with metal masts need not worry about rot but it seems that they too often want to benefit from the good luck associated with the traditional coin under the mast step.  The trouble is that a copper coin will quickly cause electrolytic decay of the aluminium. It would be logical to use an aluminium coin: some of these were minted during the period of hyperinflation in Germany in the 1920s, but they are not now readily available and may not be considered very lucky.  Apparently the recommended solution is to encase the copper coin in epoxy or silicone to insulate it from the mast. Even cruise liners and naval vessels it seems sometimes have coins welded to the base of their steel masts to bring them good fortune.

A curious example of an old tradition turning into a new superstition.
Posted by Bonita: Travels of a Victorian Yacht at 22:21
Email ThisBlogThis!Share to TwitterShare to FacebookShare to Pinterest
labels: lucky coins, Mast step, superstition