On Thursday were were visited by Gerald Lewin and David Munge. They came chugging through the Swale from Queenborough in a little motor launch on the rising tide. Both are old members of Erith Yacht Club and remembered Bonita from when she was kept at Erith further up the river Thames. Bonita was based at Erith between 1937 and 1968. We had the EYC burgee at the masthead to mark their visit.
Gerald had particularly fond memories of Bonita and Dad. He was last aboard when he was 13 and Dad had invited him to help crew in a race. He was entrusted with taking the tiller, but found that the downside of this is that the helmsman gets a steady stream of well meaning advice from the rest of the crew who feel the course being steered is not quite as perfect as perhaps it could be. Previous to this he had only sailed in dinghies: the old Hamble Stars which were kept at Erith. Dad always thought that dinghy sailors made better helmsmen as you get immediate feedback in a dinghy.

We talked about happy memories of Erith which in the days when the river was much busier and more polluted could sometimes be an exciting place in which to learn to sail. Sadly Gerald and David  did not have time to come for a sail on Bonita on this visit before returning to Queenborough while there was still enough water in the river. 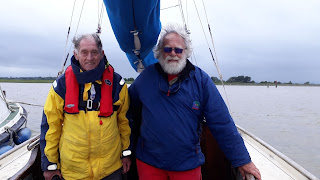 
Today was a bright and blustery day and we went for a sail with Vic and Mark. Most of the boats out had a reef in but we did not seem to find this necessary. Vic of course is an experienced Bonita sailor - specialising in sunbathing weather- but today was Marks first time afloat in her. We charged around the river at top speed before picking up the buoy under sail at the top of the tide. 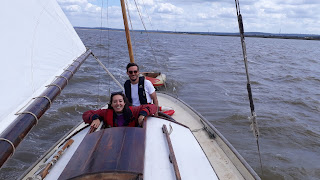 
Posted by Bonita: Travels of a Victorian Yacht at 22:55