Saturday saw the Swale race, which is the only race where Thames Barges, smacks, Gaffers and assorted other elderly craft compete together. There are usually a couple of old steam ships as well.
On the morning of the race the river Swale is a fine sight with many anchored vessels getting ready for the start, as shown in the first photo. On Bonita we had Tim, D and Sarah as crew. It was hot and sunny with light northerly winds. Certainly the sort of day when its better to be afloat than ashore. Everyone had a fun day although as usual Bonita just missed the prize list. 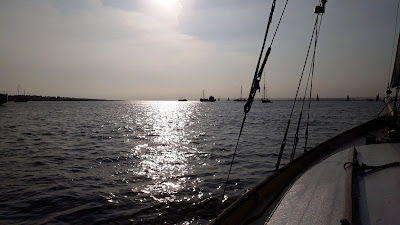 Several of the Gaffers are heading off down channel after the race to get to the Old Gaffers celebrations in Cowes in a few days time.

The second picture shows the contented crew enjoying a snack while on the run to the finish mark. The unseamanlike-looking umbrella gives some protection from the hot sun. There are quite a few Gaffers astern, though it would be better had there been rather more. 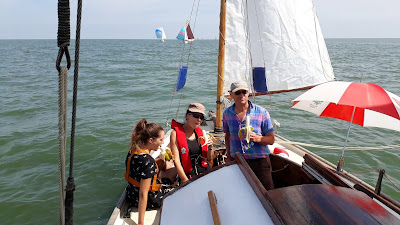 No blog is complete without at least one useless but vaguely relevant historical fact, and 1888 was also the year the British public started enjoying bananas. In this year Edward Fyffe, a London tea merchant started importing bananas from the West Indies.