We had a brisk SW wind today and left Cowes at the beginning of the West going tide.  We had a lively tack down the Solent to Yarmouth with several reefs in the mainsail. We passed the intrepid and much-travelled Robinetta heading the other way to Cowes. Here is Alison Cable's fine photo of Bonita underway. 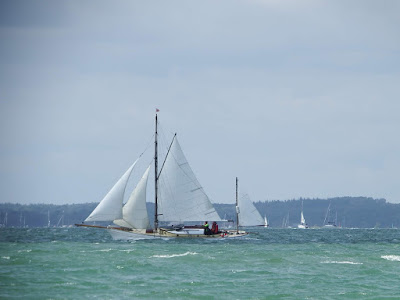 There was quite a bit of heavy swell when we took the sails down outside Yarmouth harbour which gave us a few minutes of excitement.  Yarmouth harbour is packed out with yachts but there were two harbourmasters out in their launches shepherding new arrivals, and with a bit of a push from both of the launches together Bonita was eventually squeezed into a berth.

I haven't been to Yarmouth for many years and I don't think Bonita has ever been here before.  It's certainly a harbour and town with plenty of charm and interest.  Susan J is here with Dave and Julie Patuck and it's interesting to see the changes and improvements they have made in a little more than a year of ownership. 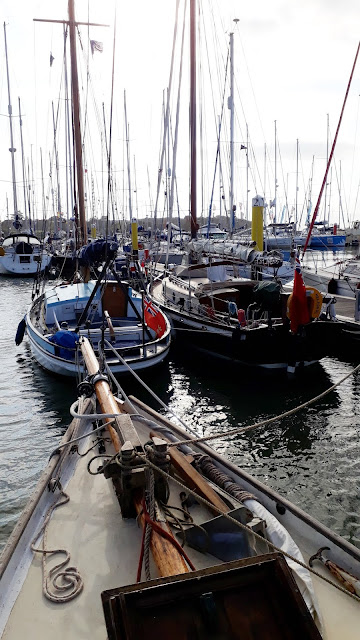 The picture shows Susan J ( on the right) and Minx tied up ahead of Bonita.  We were interested to see Minx as she is a GRP replica of a 1936 Crossfields built Morecambe Bay Prawner.  She is normally based at Brixham and is owned by Paul and Penny Jolly who are keen traditional boat enthusiasts.

We had a convivial evening with Dave and Julie, Paul and Penny in the Royal Solent Yacht club in Yarmouth.  The waters of the Solent looked much more placid seen from the sedate and elegant surroundings of the yacht club, and we look forward to some more gentle sailing tomorrow.
Posted by Bonita: Travels of a Victorian Yacht at 02:03