Round and round the island (of Sheppey)

Pictures taken on the Old Gaffers Association rally in Cowes continue to trickle in now almost everyone has got home.

Here is a photo of Toby inspecting the compass. 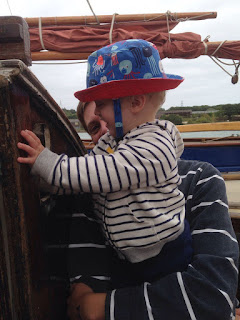 I tried to explain to him how useful it is to know in which direction we would find the North Pole, even though we have no intention of ever going there. I don't think he really grasped the concept. 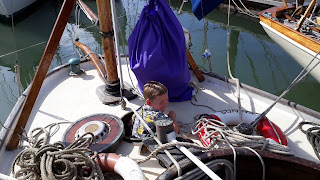 And here Thomas is emerging from the stern locker after inspecting the work done last winter to add some internal strengthening to the counter.


With Vic and Mark we went for a sail round through the Swale to the Medway on August bank holiday. I have often found the weather on the August holiday can be so dreadful that it would be better to have stayed at home, and this year was fairly typical. On the Sunday it was blowing a full gale from the SW and raining heavily. No other yachts seemed to be out. Under reduced rig of jib, mizzen and motor we soon got tired of trying to get to windward  and settled for a sheltered anchorage in Stangate creek. Here we sat down below around the cabin heater playing Monopoly while the weather howled outside. This was only Mark's second sail, and his first night sleeping aboard, so I was relieved when we woke to rather better weather on Monday. We had a brisk sail back round the outside of the Isle of Sheppey, at first with several reefs in, but taking them all out by the end of the day as the wind moderated.

Last Friday, by contrast, the day started sunny but with no wind at all. I was sailing with Justin (to become daughter Emma's father-in-law in February) and was a bit anxious as he is an expert Dragon crew.  Dragons are elegant and complex boats that are raced very competitively and maintained at a high standard; Bonita is rather different. We motored out to the Columbine Spit at the eastern end of the Swale, and there picked up a NE wind. The wind and tide were right to sail all the way round the Isle of Sheppey in a little more than a single tide.

Because the tide fills the Swale from both ends, it is possible to carry a fair tide almost all the way around the island. The Swale is not a true river with a freshwater source far inland- its technically a ria which is a sunken valley and it forms a tidal channel between the Medway and the Thames. Circumnavigating the island makes an interesting trip with plenty to see. We had a fine sail and I suspect the atmosphere aboard was rather more relaxed than on a racing Dragon - on Bonita you can light the stove and make tea while underway. 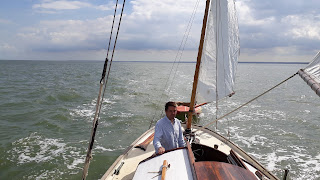 The picture shows Justin helming with the North Kent coast on the horizon astern. My apologies for not adjusting the mizzen sheet before taking the photo.


Here is the track of our (anticlockwise) circumnavigation of Sheppey as recorded by Justin's watch (!), and his photo of Bonita lying peacefully on her mooring. 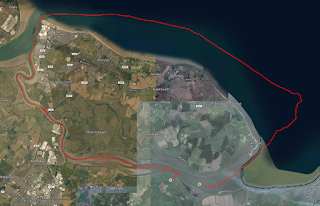 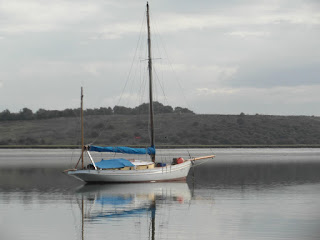 Posted by Bonita: Travels of a Victorian Yacht at 00:19
Email ThisBlogThis!Share to TwitterShare to FacebookShare to Pinterest
labels: Isle of Sheppey, River Swale