Bonita is now snug under her winter covers, while the usual list of maintenance jobs gets tackled. No major work is planned for this winter, although sometimes jobs which start small seem to end up getting a lot bigger.

The picture below is a reminder of a long warm summer: Bonita is racing in the Solent Old Gaffers race in a brisk breeze - photo taken by Julie Patuck in Susan J. 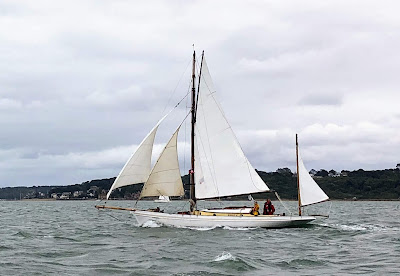 And below is a much older picture of Bonita in the River Stour - taken by the famous East Coast photographer Den Phillips in around 1985. Like most boats Bonita looks especially good in shots taken from the lee side as this emphasises her elegant sheerline. 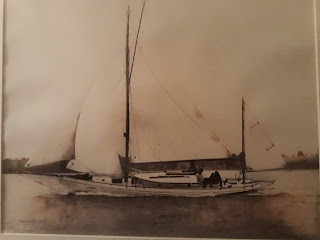 Once again Bonita has been nominated for the Classic Boat magazine Centenarian of the year. She is the oldest of the six boats being considered for this award, and as far as I can see, she is the only one that has not had a major rebuild.  I'm not sure of the process by which she got onto the shortlist, but its nice that she is there. On the previous two occasions we were nominated, Bonita was a runner up to the main prize so it would be good if we could do better in 2019.  The winner is decided by people voting online. Please do support us by visiting their website- awards.classicboat.co.uk  - and casting a vote for Bonita!
Posted by Bonita: Travels of a Victorian Yacht at 21:58
Email ThisBlogThis!Share to TwitterShare to FacebookShare to Pinterest
labels: Centenarian of the Year, Classic Boat