Sadly Bonita is still laid up in her mud berth. This is due to a combination of the lockdown, work and family commitments. At least shes better off in the mud than she would have been if she was ashore with the planks drying out in the warm weather. We hope to be able to get afloat fairly soon and maybe get in a few days sailing.

Among the cobwebs and dust in the loft space of the garage I came across Bonita's old paraffin navigation lights. These are of indeterminate age - they came with the boat when my father bought her in 1937. They look impressive ; 40 cm high, solidly made and each the size of a bucket. Part of the timeless ritual of preparing for a night at sea was cleaning and filling the lamps and polishing the reflectors with metal polish. They then had to be carried forward to be hung in the rigging. 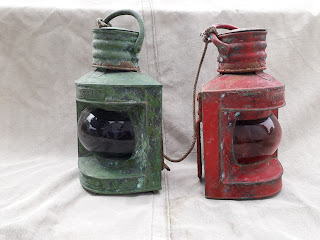 Unfortunately the lamps had a tendency to blow out in any kind of strong breeze which could be tiresome.
We had one very difficult episode, after a long crossing from Zeebrugge we were tacking into Harwich harbour in the dark in heavy weather with plenty of shipping about. We had to keep the navigation lights down in the cockpit, and cautiously raised the appropriate lamp over the cockpit coaming when  a ship was approaching in the hope that we would be seen. Even then they often blew out and had to be relit.
That was when I decided that we would have electric nav lights fitted before we spent another night at sea. And the old paraffin lights have spent the last 30 years gathering dust in the loft.

What is to become of them?  They could be converted to electric which would look traditional, but they are so much larger and heavier  than modern navigation lights that it hardly seems worth the trouble. I suppose I could get a few pounds for them on eBay and they might end up with other nautical curios  in a waterside pub somewhere. Its almost easier to return them to the loft.
Posted by Bonita: Travels of a Victorian Yacht at 21:31
Email ThisBlogThis!Share to TwitterShare to FacebookShare to Pinterest