Bonita is on her mooring and has finally been painted. Scrubbing off and painting in the middle of summer is so much easier as the days are long and the water is warm. Also barnacles are less likely to regrow after a midsummer scrub as it comes at a later point in their annual life-cycle. 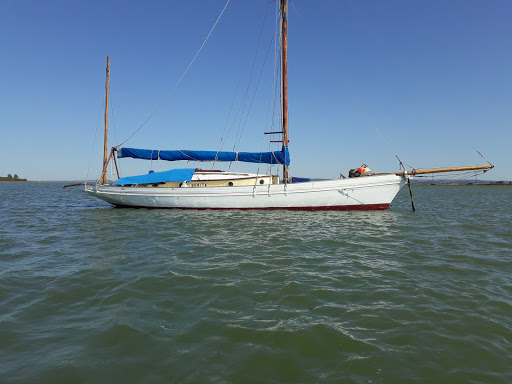 Sadly it doesnt look as though we will get any more than the occasional day sail this year with no plans for any more adventurous cruising. Some years are just like that. We are hoping to take part in the Swale race later this month. For many years this was run with astonishing efficiency by the late and much-missed Lena Reekie. Last years race had to be cancelled due to stormy weather. This years race will be very different due to social distancing. I imagine that there will be far fewer of the larger boats needing big crews, and the prize giving will be 'virtual' rather than the usual jolly and rather boozy affair ashore. However I think its important that the tradition of the annual Swale race is kept going and we hope Bonita will be there!
Posted by Bonita: Travels of a Victorian Yacht at 18:21