Not the sort of canvassing they do in elections. There have been one or two small leaks in Bonita's cabin roof and I wondered during the summer if it was time to renew the canvas on the roof. It is possible to patch and paint and hope for the best for another year or two, but I worry about the possibility of rot developing under the canvas. And once you start taking the canvas off its all got to come off: theres no going back.

So, on the general principle that its the bits you don't look at that are the ones most likely to give trouble, I decided it was time to take off all the varnished fittings and strip off the old canvas. I was relieved to find that some of it was in quite poor condition so the job did need doing.

The picture shows the planked cabin top in a state of nature with the canvas removed.  The black stuff is old hardened marine glue. There are a number of wooden patches and fillers where there used to be patches of rot. The planks have all been treated with plenty of wood preservative 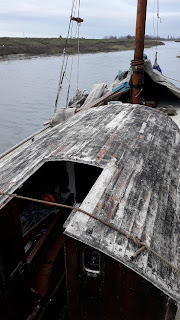 I have done this job several times over the years, and each time I wonder if I should use something more durable and more up-to-date than painted canvas. For many years it was covered with linoleum, which must have been difficult to fit to the double curve of the cabin top. The roof does move and flex quite a bit with sailing stresses and people jumping on it. So there is benefit in using a covering that is reasonably flexible and also easy to remove. In general I find a canvas covering lasts about 8 or 10 years.

With patience its fairly easy to stretch on a new piece of heavy grade canvas, as in the second picture. It soaks up a huge quantity of paint so its not a good idea to use expensive yacht enamel. 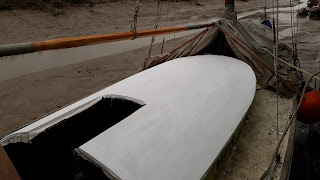 The fittings are at home waiting for a coat of varnish before going back on. We are also rebuilding the reefing gear in the hope that reefing can be made a bit easier and quicker.

No doubt a few other things will emerge that need fixing before we are ready for the new season.

Posted by Bonita: Travels of a Victorian Yacht at 23:47