Being unable to visit the boat, our garage at home is cluttered with various bits of boat gear in various stages of being dismantled and/or restored. Lets hope its not too long before they all go back on the boat where they belong.

I bought the cabin clock home as it has been behaving erratically and needs a bit of TLC. As with so many things to do with Bonita, it has a bit of history. It originally came with a boat my brother Tim bought in the early 1970s. She was the Huzure, a 31 foot Fred Shepherd designed bermudian cutter built in 1937. Tim bought her with his friend Justin to do a bit of blue water ocean sailing. Having set out from the river Swale Huzure's cruise sadly came to an unfortunate end in 1977 when she was wrecked on Lady Elliot Island at the southern end of Australia's Great Barrier Reef. The cabin clock was among the items Tim salvaged from the wreck and it subsequently completed its circumnavigation in a packing case in the hold of a much larger ship.

Wind-up clockwork marine clocks such as this seem to be hard to get today, and most boats now seem to have the quartz battery powered type. I took the clock to our local high street jewellers and despite the fact that they had several vintage-looking clocks on display, they clearly weren't keen to take it on: I was told  that they have to be sent away, minimum charge £300 and don't expect to see it again for at least 3 months. 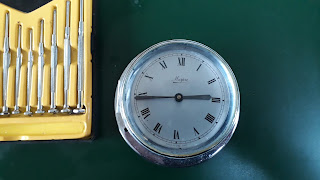 This seemed a pessimistic approach to what is basically a fairly simple piece of mechanism. For a considerably smaller sum I bought a set of miniature jewellers screwdrivers and after a couple of hours work, adjustment  and general cleaning the clock now seems to be running as it should. Of course ticking away on a stationary shelf in a warm dry house is rather different from being fastened to a bulkhead on the boat, but with luck this well travelled little clock will keep going for a few more years.

Posted by Bonita: Travels of a Victorian Yacht at 16:12
Email ThisBlogThis!Share to TwitterShare to FacebookShare to Pinterest