We were joined by Ant Bennett on Saturdy night. Ant is a gaffer owner but not such an old one. We were tempted out of Brighton marina by sunshine and light winds. The forecast was for strong winds later but maybe that would be quite a bit later. So off we went hoping to get through the Looe channel off Selsey Bill. The Looe has a reputation of being a dangerous place in bad weather, but  isn't a problem under good conditions...

Sadly  the forecast was right and halfway on our course we were pushing into heavy seas with several reefs in.

After a crew discussion we decided it would be more sensible to go back to Brighton. (At about the last point on the chart shown below). A quick journey back to the marina with a tricky entrance and a rising wind. Bringing up to the pontoon was achieved safely and without drama thanks to Ant making a flying leap from the bowsprit with a mooring rope. Safely moored at 7pm - one hour before low tide - phew! 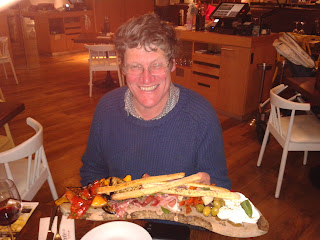 This blog written in the comfort of Zizzis restaurant (20% off for marina customers) sheltered from a strong cold wind by a large picture window.

Still researching wind, which is presently SW - i.e. not favourable - before deciding when (or even if) we're departing tomorrow (Tuesday)