The Oldest Boat in port 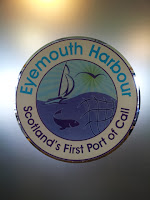 Today we are in Eyemouth which proudly promotes itself as Scotland's first port of call (it is also of course Scotland's last, depending on your point of view).

I'm sorry to say I had never heard of Eyemouth before we started planning this trip but it is an interesting place with a lot to see. As well as an active fishing port there is a collection of interesting boats and a museum of smuggling and smugglers. The Eyemouth folk seem quite unashamed of the town's criminal past: there are many exhibits in this museum of tax evasion designed specifically to appeal to the impressionable young. As so often it seems it wasn't the smugglers themselves who came off best, but the people who dealt in smuggled goods.


The picture on the right is of the of the oldest boat in the harbour. She is Bertha, a steam dredger designed by I K Brunel and built in 1844 which probably makes her the world's oldest surviving steam powered vessel. Built to keep the port of Bridgewater in Somerset navigable she did not lift the mud from the bed but just moved it with a plough out of the harbour into the river Parrett where the ebb tide would carry it out to sea.

Bertha has no propeller or paddles - she moved herself under steam power by winching along a rope or chain attached to shore bollards. We were fascinated to see this ancient reminder of one of the world's most famous engineers. Bertha deserves to be better known and to be conserved and exhibited under cover where it can be better appreciated.

In the afternoon we had tea with Chris and Martin who we last saw in Tobermoray and discussed the ports and harbours of the north east English coast.
Posted by Bonita: Travels of a Victorian Yacht at 11:19