Bonita has not always had her gaff yawl rig. She was rigged as a gaff cutter ( with one mast) until 1907, when she was converted to yawl. Then for about 20 years from the mid 60s she sailed under Gunter rig.
Gunter is a variant of gaff rig, where the gaff runs vertically alongside the mast  and takes a triangular mainsail above the masthead, so the overall effect is similar to Bermudan mainsail. It is common on small dinghies but rarer on larger boats. The picture shows Bonita with her gunter mainsail - this photo was taken in Holland in 1971. 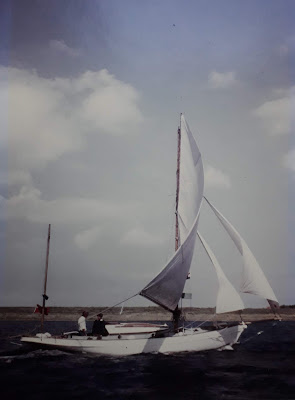 Gunter rig is named after Edmund Gunter 1581-1626, an English professor of mathematics. This may sound rather improbable, and as far as we know he had no particular interest in the design of small boats. However he applied the newly discovered logarithms to produce an early version of the slide rule. The slide rule was universally used for calculations involving multiplication or division, and many became very expert with it but it has almost entirely disappeared since the introduction of electronic calculators. Gunters rule consisted of two pieces of wood marked in a logarithmic scale sliding alongside each other, or sometimes one piece of wood with readings taken off with dividers. Gunters rule was much used on ships to perform navigational calculations, and examples has been recovered from old shipwrecks. It must have seemed natural to call the rig with the gaff sliding along the mast 'gunter rig'.

Bonita sailed a bit better to windward under gunter rig, and the first reef was easier to take in. However I did not think it really suited her classic hull shape. So when the time came for a new mainsail I felt we should revert to more traditional gaff rig.

Posted by Bonita: Travels of a Victorian Yacht at 19:30