We recently found that Bonita has been entered into the National Register of Historic Vessels - here is her certificate below..... 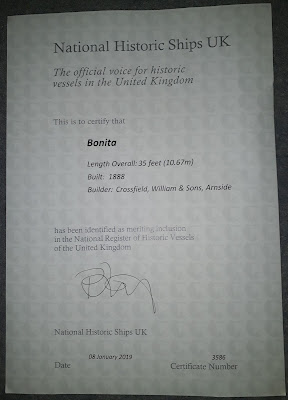 This is in recognition of the fact that she is an almost entirely original Victorian yacht: also the oldest Crossfields built boat afloat and possibly the first yacht that Crossfields built - at least she was their first entry in Lloyds yacht register, which was first published in 1878.


For a long time we have been looking for a picture of Edwin Grundy Wrigley, the man who commissioned Bonita and was her first owner. Recently, with the help of Wendy Gradwell, who works for the Bury Archives, we have found the photo below.


Edwin Wrigley was a prosperous local businessman who was part-owner of a large paper mill; he lived in an impressive house on Holme Island which is near Grange over Sands. No doubt William Crossfield would have put his best efforts and finest materials into his first yacht commission for such a prominent local person.  Sadly Wrigley did not live to enjoy sailing Bonita for very long. He died in Cairo in 1892 at the age of 60. Wealthy people at around this time sometimes took a sea voyage by steamship to Egypt when hoping to convalesce from serious illness, and that seems to be the explanation in his case.
Posted by Bonita: Travels of a Victorian Yacht at 19:53