At the weekend  D and I attended an excellent  conference at Arnside with several talks on  Crossfield's boats and the contributions of the Crossfield family of boatbuilders. The conference was ably organised by Alasdair Simpson of Arnside Sailing Club, and there were about 60 people present including several owners of Crossfield built boats. Alasdair was presented with an OGA trophy for his efforts in organising the meeting and researching the local boatbuilding industry. 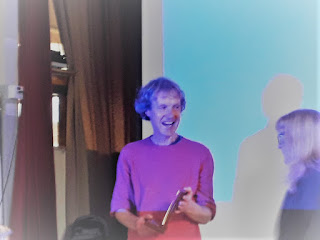 There were several members of the Crossfield family present, and Eric Crossfield, who is a member of the Old Gaffers also spoke. The boatbuilding business closed down in 1940, and I think they were pleased to see that their name is still held in such high regard. 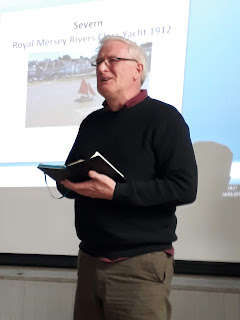 Its possible to see the site of the boatshed where Bonita was built, although the building has now gone and a couple of semi-detached houses are being built on the site.  The boatshed was in the middle of the village a little way up a hill from the river, so finished boats were rolled on a trolley down the middle of the street to be launched. They had no way of getting boats back up the hill into the shed, so any repairs or modifications had to be done on the beach between tides. The site of the boatshed seems very small, when one imagines them melting down tons of lead to cast a boat's keel, or steaming large planks to bend them into place to make the Nobby's characteristic elliptical cockpit coamings. Yet very many boats were built here over around a hundred years and established the family's reputation for good quality work.
There was a general feeling that the conference was too good to be a 'one-off' so maybe we shall be making a regular pilgrimage to Arnside in future.