The date of Easter varies as it is linked to Passover, and hence the lunar calendar. Conveniently this means that at Easter we always get a combination of spring tides and public holidays - ideal for getting Bonita out of her mudberth and out onto her mooring. The picture shows the full moon rising over the flat Kentish coast. The moon looked huge as it always does when it's on the horizon . This is an optical illusion though which is why you can't capture it in a photo; the actual angle the moon presents to the eye is always the same. 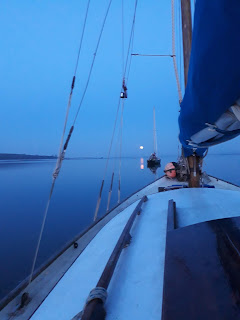 So Bonita is back in the rural surroundings of the river Swale, but with the familiar bulk of the Kemsley paper works on the Western horizon.  There is a historical connection here for those that like this sort of thing.  Bonita's first owner, Edwin Wrigley made his money from the  paper mills of Manchester.  In the early 19th century, paper was made from rags and cotton waste from the Lancashire cotton mills. Papermaking needs a lot of energy, which came from water-wheels driven by the streams coming off the Cumbrian hills.  By the 20th century the economics of the industry had  changed greatly.  There were huge demands from Fleet Street for newsprint: the raw materials were now woodpulp from Scandinavia and esparto grass from Spain: and the power source came from coal or electricity.  Papermaking, like Bonita, drifted south and the Kemsley works near Sittingbourne became one of the largest in the country, supplied by small coasting vessels coming up the Swale.

We still have some painting and minor maintenance to do but its nice to be afloat once again for the new season.
Posted by Bonita: Travels of a Victorian Yacht at 23:26