This year we hope to cruise to the West Country, although this will have to be fitted in around a number of other commitments.

With Ant as crew we left our mooring on the Swale at high water today - around 4.40am. The compensation for this early start was watching the sun rising above a clear horizon. It was a day of light winds but we were able to carry a fair tide all the way to Dover. Entering Dover amidst all the ferry traffic is always interesting as usual there is a lot going on in the harbour and the town.


We saw several 'Border Security' boats that patrol the Channel to discourage illegal immigrants in small boats. Despite any concerns over Brexit the harbour is certainly busy. There is a constant stream of ferries, lorries, cars and coaches using the port and no doubt a fair number of migrants both legal and illegal. There is little sign of Brexit uncertainty in the Eastern end of the harbour where there is major redevelopment in progress, much of it  funded by the EU with the aim of improving communication between EU countries. This development will include a new and larger yacht harbour so many more yachtsmen will be able to enjoy tackling the turbulent tides sweeping past the entrance to the harbour. 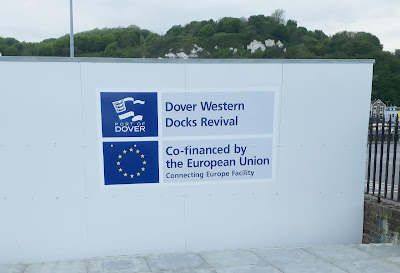 We had a more relaxed afternoon after such an early start, and climbed the famous White Cliffs to enjoy this panoramic view of a huge harbour: 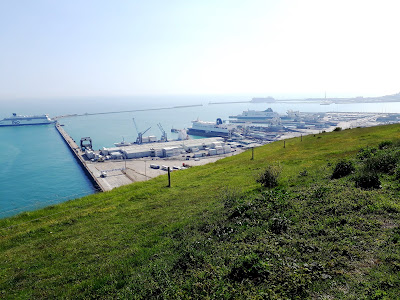 Posted by Bonita: Travels of a Victorian Yacht at 18:43
Email ThisBlogThis!Share to TwitterShare to FacebookShare to Pinterest