Following our lively re-entry to the marina we have been reflecting on the design of harbour entrances and how tight turns in the entrance channel might be good for preventing wave transmission but can be quite a challenge for an historic yacht with a long keel and quarter mounted prop. But then modern marinas are not designed with bowsprits and bumpkins in mind either.

Built between 1971 and 1979 Brighton is unique in being the only UK marina constructed on an open coastline, all other marinas have either been built in naturally sheltered sites or in old commercial harbours. Later this year the Brunswick Group, who own the marina, are due to commence construction of five large residential blocks, four of which are to be sited partly in the outer harbour on top of the spending beach while the fifth will be on the mole where the RNLI berth is currently located. 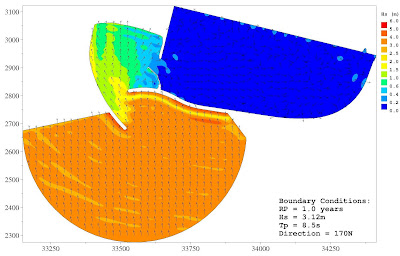 The spending beach forms an essential function in absorbing wave energy that enters the outer harbour. As part of this latest development extensive numerical and physical wave studies were carried out to ensure the wave climate would still be acceptable. The image on the left shows the result of a numerical model for a 1 in 1 year southerly storm with a 3.12m significant wave approaching the marina. The present condition, without the proposed development, is shown. 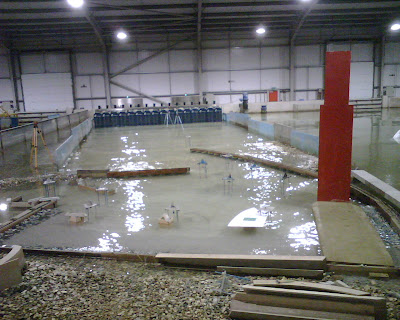 The photo on the right shows the physical model constructed at HR Wallingford's laboratories in 2008 with part of the proposed development in place. The large red object on the right is the development's western 37 storey tower, the blue object in the background is the wave generator and the little blue tripod structures are wave monitoring instruments. Part of the bases for three more towers can be seen in the foreground.

Here is a short video clip of one of the wave model tests. With waves overtopping the breakwater it represents a day much like today when its better to be securely moored inside the marina!

Posted by Unknown at 12:19
Email ThisBlogThis!Share to TwitterShare to FacebookShare to Pinterest