Bonita's trip has attracted some sponsorship. First we have been presented with a smart logo  by the excellent digital branding agency Vitamin London. 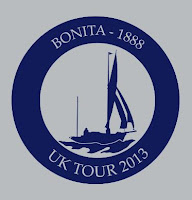 Designed specifically for the trip this logo will feature on our crew attire which is being generously donated by the UK's leading marine consulting engineers Beckett Rankine. Why Beckett Rankine? Well, apart from a family connection which keen-eyed readers might have spotted, Beckett Rankine are also celebrating 125 years of history this year and what better way than to sponsor a 125 year old yacht's tour of UK ports!

Beckett Rankine's origins began in 1888 when Robert White (current director Gordon Rankine's great grandfather)  set up in business as a consulting engineer. Originally specializing  in railway projects, mostly in India, the firm moved into port work in the early 20th Century. Robert White's son Sir Bruce White was responsible for the design of Richborough port during the 1st World War and then the Mulberry Harbours in Normandy during the 2nd World War. Bonita will be passing many of the firm's achievements en route with some of the more notable projects getting a mention in this blog as we go.

While on the subject of anniversaries we are undertaking this voyage as part of the Old Gaffers Association's Golden Jubilee Round Britain Challenge. Details of the event and all the boats (and bloggers) taking part in it can be found on the OGA50 website.
Posted by Unknown at 15:04
Email ThisBlogThis!Share to TwitterShare to FacebookShare to Pinterest
labels: Beckett Rankine, Vitamin London