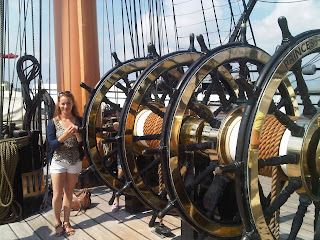 Bonita stayed in Gosport today and as it was my birthday the twins and I took the ferry to Portsmouth. We saw the Mary Rose (better preserved than when I last saw her), HMS Victory (worse, but some work is in progress) and HMS Warrior which I had not seen before. The Warrior, launched in 1861, is a very impressive demonstration of mid Victorian naval power with many fascinating points of detail. We were interested that there is a demand to book her for wedding receptions and parties; a little odd since she is the mid-nineteenth century equivalent of a weapon of mass destruction. It seems very different from getting married in church. 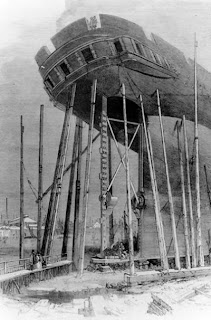 The photo above shows Emma at the helm of the Warrior.  In spite of her revolutionary design, in service the ship was very hard to steer and erratic to maneuver. There are facilities for up to 24 men to steer at once using linked wheels on three decks. One reason for this is that she did not have a balanced rudder. A balanced rudder has up to a quarter of the rudder blade extending forward of the rudder post, and it greatly reduces the effort required to steer powered ships that have a propeller directly in front of the rudder. The etching on the left shows the stern of Warrior under construction at Thames Ironworks. The two-bladed propeller was located in front of the rudder post and could be retracted up into the hull when the ship was under sail.

In the evening D and Sarah joined us to see something of Portsmouth after dark.
Posted by Bonita: Travels of a Victorian Yacht at 08:30