The SW winds had set in and Ant had run out of time, so I left Bonita in Dover for a couple of days.  I returned on Monday with Chris and Nic who made up a very experienced crew.  Among other things, Nic has sailed in Bristol Channel Pilot cutters, and Chris has sailed round Cape Horn in a square rigger.  I we hoping therefore that Bonita would be on her best behaviour (as she usually is). 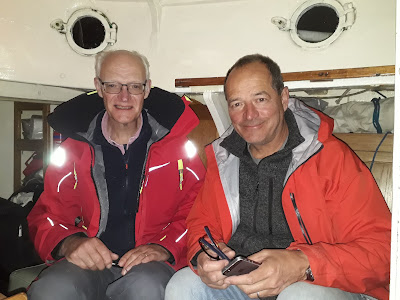 We left Dover at the beginning of the west-going tide and had a fine close reach as far as Dungeness.  We then had a mixture of calms, head winds and rain squalls but nevertheless we managed to get to Sovereign Harbour in Eastbourne in time before the restaurants closed.

The harbour is a little way out of town and when we last visited  there was not much here apart from the prospect of a long walk into Eastbourne. There has since been a lot of building and as well as plenty of flats there is also a fine choice of places offering refreshment. However with our excellent all-weather crew we hope to be able to resist these temptations and move on tomorrow.

Posted by Bonita: Travels of a Victorian Yacht at 01:09