A blustery sail to Brighton

We woke to a day with a blustery SW wind, but thought that with a bit of help from the tide it would do to get us round Beachy Head.  We locked out of Sovereign Harbour and had a rather wet close-hauled sail past the white cliffs of Beachy and the Seven Sisters to Brighton marina.  As we were approaching the marina the wind strengthened and bought a persistent rain shower which was unhelpful when trying to negotiate a difficult entrance.  However we eventually tied up to a pontoon conspicuously marked 'No Mooring' and it seemed it would be alright for us to stay here, at least for a while.

As always there are a wide range of interesting boats at Brighton, and in particular there are three Dunkirk 'Little Ships'.  All look very well cared for and in absolutely immaculate condition.  It's good to see old wooden boats being so well looked after.  The Little Ships that took part in the evacuation of the troops from the beaches of Dunkirk in 1940 - mostly small motor cruisers- are entitled to fly the St Georges cross flag with the arms of Dunkirk in the centre. 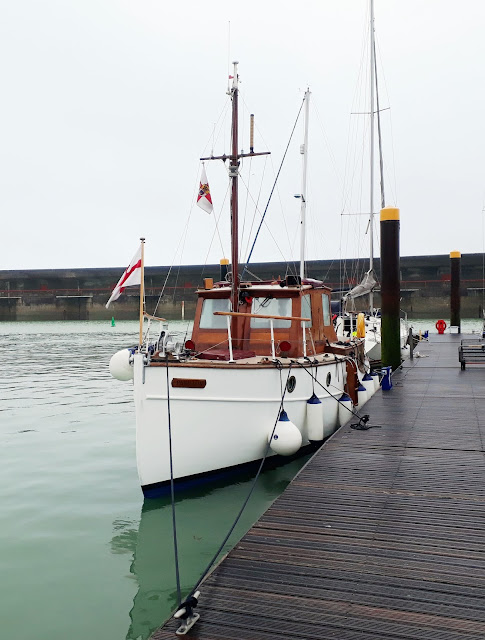 To escape the persistent driving rain we took the bus to Brighton, and after a quick look round without spending any money we returned to the marina for supper in a French restaurant.  We were served by an attentive waitress who had a reasonably convincing French accent but who turned out to have come from Romania.

As always our plans for tomorrow depend on the weather; but if necessary there is still plenty to explore in Brighton.
Posted by Bonita: Travels of a Victorian Yacht at 10:56
Email ThisBlogThis!Share to TwitterShare to FacebookShare to Pinterest