Bonita spent the day in Brightlingsea awaiting new crew, and anyway there was a strong SW wind blowing so it was not suitable for going out and crossing the estuary. A few dinghies set out for a short, wet and exciting sail in the Colne. I did odd jobs aboard including strengthening the bit of starboard rail that had been nudged by the smack in Saturdays race.

Brightlingsea has always been a sleepy little place but it seems to have adjusted reasonably well to changing times. There used to be an active smack and small boat builders on the waterfront but these have closed down and the site has been developed for flats and shops. Some of these are still empty after several years.
There is also windfarm work, as in several other small harbours we have visited. Whatever the costs and benefits of offshore windfarms, their ongoing need for maintenance has bought employment to many small ports hit by the decline of the fishing industry. There are still lots of fishing smacks at Brightlingsea as there always have been, but now they race  and might occasionally fish, rather than the other way round.

Thames sailing barges for many years traded produce up and down this coast and into London. The barges still visit, but now their cargos consist of  fare paying passengers. 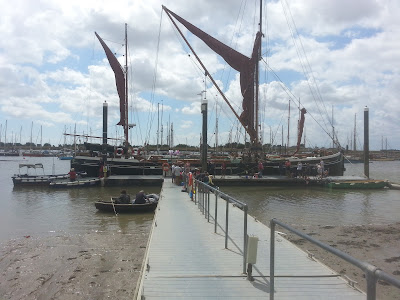 The picture shows the barge  Hydrogen picking up customers from the pontoon in Brightlingsea.
Hydrogen was built in 1906 and is clearly still in excellent condition. She was originally built to carry industrial chemicals, as were her sister ships Oxygen and Nitrogen.

When barges could no longer trade profitably under sail Hydrogen's sailing gear was removed, an engine was installed, and she carried on working as a motor barge. By the early 1960s only one barge, Cambria, was still carrying cargo under sail (although it is said that her owner/skipper Bob Roberts made more money from appearing on the BBC than by trading). Later, with the revival of interest in sailing barges, Hydrogen was, like many other motor barges, converted back to sail again.
Posted by Bonita: Travels of a Victorian Yacht at 09:42