We left Hartlepool at about 8am, encouraged by the prospect of a Northerly wind.  Indeed we could see from flags and smoke ashore that there was indeed a satisfactory northerly wind blowing inshore. However a mile or two off the coast we had a persistent SE wind.  In spite of this we arrived at Whitby at 5pm - about high water.  The harbour entrance is straightforward in most conditions although there is little water at low tide and you have to pass through an old (1908) swing bridge to get into the inner harbour and marina. 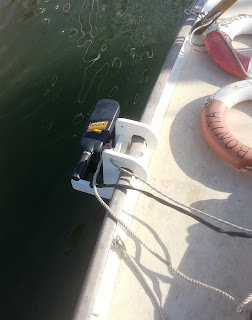 The marina was quite full, partly due to an influx of gaffers heading south.  After a while jilling around we had to reverse Bonita into her berth under motor.  This sort of manoeuvre used to be impossible and if attempted was likely to end in tears, or at least a frank and bad tempered exchange of views with neighbouring yachtsmen. However recently I have started using an electric outboard clamped to the starboard rail to improve her maneuverability and, as long as there is no significant cross wind, it does seem to help.  It counteracts the effect of the propeller on the port side, and the old lady will spin round on the spot if conditions are right.

Whitby is a lovely town with many attractions. It was the childhood home of Captain Cook, and there is a famous and dramatic Abbey overlooking the town and surrounding countryside.

We were berthed alongside High Barbaree and as so often on this trip were amazed at the space available on modern gaffers.  Although Whitby has many unexplored attractions we are hoping to be able to progress further tomorrow.

Posted by Bonita: Travels of a Victorian Yacht at 00:10