I got back recently from a 5 week stint on Bonita, joining the boat in Torquay, Devon  in early May and finishing at Tobermory on the Isle of Mull, Scotland. The trip ranged from being rather challenging to lovely!  It was full of contrasts in all sorts of ways. We were haunted by cold northerly headwinds for the first three weeks; gale bound in Plymouth for over a week and in Waterford, South East Ireland, for five days. The trip around Land’s End to Waterford took 50 hours, with two nights at sea and much seasickness.  Our friend, Dave Patuck, who valiantly volunteered his services as additional crew for this part of the trip, said it was the coldest he had ever been and he had previously worked in Antarctica! I got used to living in five layers of clothing, including thermal underwear. My summer clothes, packed in anticipation of sun and warm fair winds, hardly saw the light of day and the paraffin heater on board was in regular use! On the positive side, we spent many interesting hours wandering around museums and sites of historic interest in Ireland and I now have a much better idea of Irish history, and how Waterford glass is produced, an unexpected bonus! 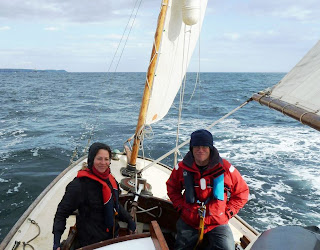 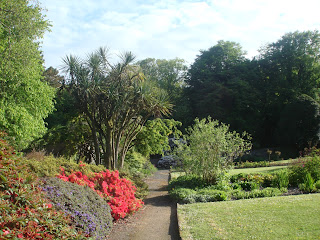 It is said that the Western Isles of Scotland provide one of the best sailing grounds in the world and this may be true. In contrast to the earlier part of the trip, spending a couple of days on the small island of Gigha, where there are only 120 inhabitants, was lovely. The weather was better and we discovered that the Gulf Stream provides warmer seas, a relative lack of frost and snow, and sub-tropical gardens, not what we expected. The days on the Island of Mull were some of the best, with warm sun and fantastic scenery. The pictures show the transition from winter to something which resembled summer, with Bonita rounding Land's End where there was a choppy sea and very cold wind, to the sub-tropical gardens on Gigha and sunshine on Iona.  Who needs to go to the Med? 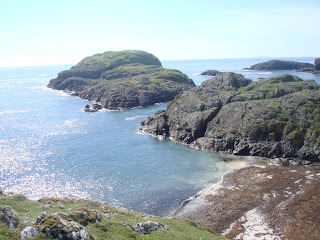 Apart from the contrasts in weather, people and places, the relative simplicity of life on the boat and our dependence on the wind and tides will leave a lasting impression. It's surprising how easily one adapts to life aboard, living in a small space with few possessions. How quickly you get used to not knowing much about what is going on in the world, but becoming obsessed by the shipping forecast.  Days go by while you wait for wind in the right direction. Perhaps, in a modern boat with a powerful engine it would be different, but Bonita cannot push against wind and tide, even with the help of her engine. When motor sailing from Waterford to Dublin, we spent some hours during a moonlit night, moving at one to two knots (nautical miles per hour) against the tide as there was no suitable anchorage…. slower than walking!  Sailing is as much about patience and endurance as it is about seamanship. Also a reminder of how we are not in control of the weather systems!

Life is rarely boring on board, whether in port or at sea. Seeing dolphins lifted our spirits on the long trip from Land’s End. You can never let your guard down. We had a close encounter with a cargo ship in the Irish Sea, and I discovered the dangers of floating line between fishing buoys, put there to trap the propeller of the unwary yachtsman at night! The Scotsman, sailing his boat single handed off the Isle of Mull, in a kilt probably took the biscuit however. Overall, a real adventure!
Posted by Bonita: Travels of a Victorian Yacht at 14:37