Back in fresh water

We decided to try out the repaired engine in fresh water so today we motored through the canal system in the direction of Delfzijl on the river Ems.

I had not previously been on the canals of north Holland, and they are much quieter than the ones on the 'fixed mast route' further south. There is much less commercial traffic and they are in general much more peaceful.
The picture shows a genuine working windmill complete with canvas sails. When we took the picture it was slowly turning in a gentle breeze. Today's windmills seem to be referred to as wind turbines, but the Dutch got there first. Usually their purpose was to pump water from the low lying fields up into the canals, whereas in England they mostly were genuine mills, grinding corn. 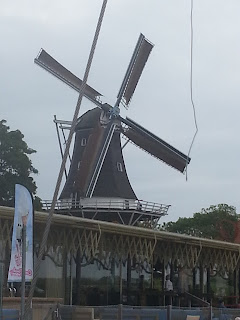 After several miles of gentle motoring through fields and farmland we got to Groningen by early afternoon. The canals here are a bit more hectic as there are lots of bridges and some fairly unmanoeuvrable craft trying to negotiate them. Bonita had to go  through one bridge backwards in reverse gear. On another occasion we were busy doing a 3 point turn in the middle of a canal when a tourist boat full of passengers came up close to see what all the fuss was about. D had to fend off the tourist boat with a boathook to prevent damage to both boats. The skipper of the tourist boat seemed quite unconcerned but there was plenty of interest from his passengers who gave D a round of applause.

The bridges mostly stop opening after 8pm so we came to a halt at a bridge about 4 miles short of Delfzijl. We  spent the night securely tied up just off the main canal.
Posted by Bonita: Travels of a Victorian Yacht at 23:17