We left Makkum early today and locked out into the Waddenzee, a large and wild area of shallow seas and sandbanks inside the Frisian islands.  There are large areas of carefully protected nature reserves, and the main industry seems to be tourism.  There were lots of boats out sailing and we saw several large traditional Dutch boats with large charter parties aboard sitting around on deck and waving at passers by such as us. 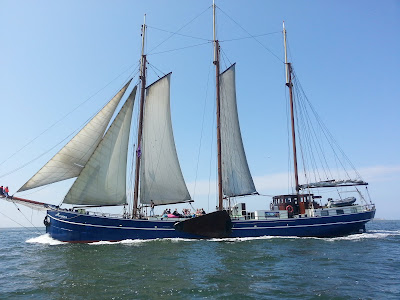 We had a rather tortuous sail through narrow channels and by mid afternoon arrived at the island of Terschelling. Here there were lots of old barges moored so that from a distance the appearance of many masts against the skyline looked like a view from the days of commercial sailing ships. 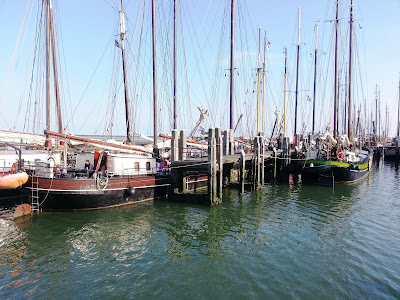 The harbour was especially crowded as there is to be a music festival here in a few days' time.
We had supper in the Storm restaurant (sobering pictures of shipwrecks and lifeboats on the walls).  During a convivial evening Steve was asked if he had come as a performer in the music festival - he managed to give a performance that suggested that at least this could be a possibility.

Dee was supposed to be joining us today but sadly she missed the ferry due to her flight being delayed at Gatwick by lightning strikes (we had blue skies all day). So this evening unfortunately she was on her own in an hotel on the mainland while were were enjoying the restrained pleasures of the Storm restaurant.

Here is the day's run: 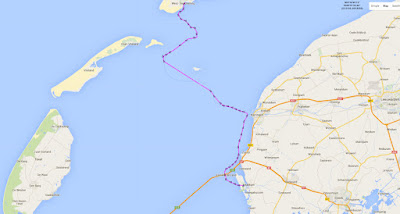 Posted by Bonita: Travels of a Victorian Yacht at 00:20