Today is midsummer. At least it is everywhere in the northern hemisphere except Sweden. It seems that the Swedes celebrate midsummer's night with such enthusiasm that little work is likely to get done the next day. Therefore in Sweden it has been decided that midsummer this year will be on Friday.
Disregarding this technicality, we had a genuine summer's day, warm with blue skies. We had a 30 miles sail to the harbour on the small island of Hanö. The first picture shows Bonita and Calismarde tied up to the quay of this miniature harbour. 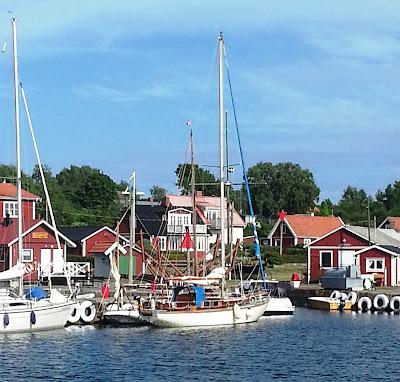 This island  is virtually the beginning of the Swedish archipelago which consists of over 24,000 islands and stretches right up the east coast.  There is much of interest here although there are only 60 permanent residents and we were reliably told that 'nothing' happens in the winter.
We walked over the island which is mostly granite which has been moulded by the glaciers of the last ice age. The Royal Navy had a base here during the Napoleonic wars and there is a cemetery containing the remains of British sailors who died here in 1810-12.

There are open air sculptures, artworks and installations that appear unexpectedly as you walk around the island: the third picture shows a steel raven and the fourth a tree of hearts. There are large numbers  of real birds too, perhaps helped by the fact that the island is too rocky to support  agriculture. 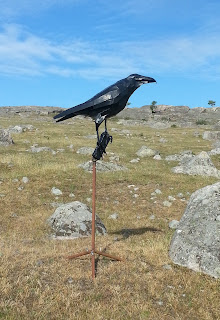 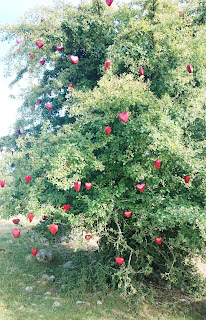 We had a swim in the Baltic, which is noticeably less salty this far from the open sea, and a barbecue on the quay as part of our own celebration of midsummer.

Posted by Bonita: Travels of a Victorian Yacht at 22:38