Due to persistant SW winds I left Bonita at Brighton for a couple of days, returning on Friday when the situation looked much changed and more encouraging: the sky was blue, the sea flat and the wind a gentle southerly.  In the marina we saw this business-like looking Japanese round-the-world yacht. The japanese dont have a reputation as producing many long distance yachtsmen and I cannot remember ever seeing one of their yachts  in UK waters before. 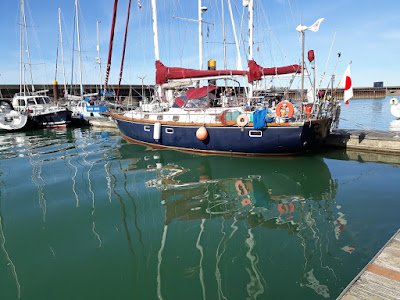 We found Bonita boxed in by a flotilla of French yachts that had arrived from from Dieppe, but with Chris as crew we managed to extricate her and reverse away from her berth without loss of paint or damage to international relations. We then had a light wind sail in the sunshine along the Sussex coast, through the Looe channel and into the Solent. Here we saw no fewer than five immense cruise liners leaving Southampton in quick succession on the tide: huge steel floating cities with thousands of people enjoying whatever facilities might be on offer and the view from high above the sea. 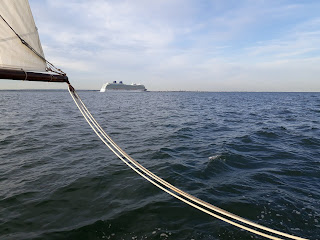 Getting away from it all


The wind petered out in the evening so we anchored for the night in Osborne bay, off the Isle of Wight.
This morning we woke to a brisk SW force 3-6 and had a lively sail to the western end of the Solent. We berthed at Lymington in the Yacht Haven. This is where Chris and Alison keep their boat so a bit of local knowledge when getting in was most useful. There are two marinas in Lymington, but confusingly they use the same VHF channel to talk to the yachts. It was only when I told them I had tied up to a berth which apparently didnt exist that I realised I was talking to the wrong marina.
However it was all sorted out eventually and we left Bonita securely tied up. I now have to leave her for a few days for a family outing to Normandy. However I hope to resume progress westwards with fresh crew and with luck more favorable winds.

Posted by Bonita: Travels of a Victorian Yacht at 19:55
Email ThisBlogThis!Share to TwitterShare to FacebookShare to Pinterest