Yesterday evening Jacob had to leave to go the work but fortunately D came down on the train for a few days' sailing.  Today was the final day of the Falmouth Classics with a parade of sail in the harbour.  The theory of a parade of sail is that for the benefit of the spectators each boat should progress in an orderly fashion under sail, keeping a set distance from the boats ahead and behind.  In practice there was a fresh breeze and everyone had difficulty keeping their speed down.  On Bonita we just had jib, foresail and mizzen up and were still going too fast.  However the Parade must have provided quite a spectacle even if the boats might have seemed a bit jumbled up. 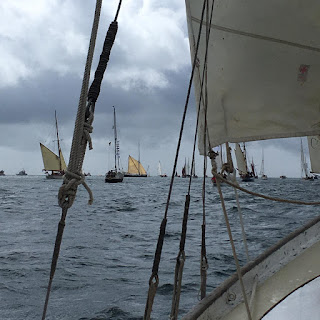 The Parade of Sail
.
The rally ended with a prize giving in the Maritime Museum and has definitely been most enjoyable and a great success: we were glad we came.
The second picture shows the 50ft electric launch Constance, originally Victorian but recently extensively restored and kept on the Helford river. 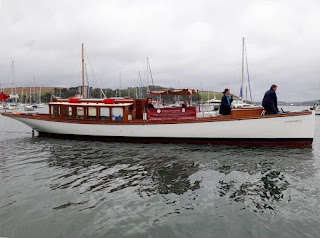 The third picture is of one of the most interesting exhibits in the Falmouth Maritime museum: the 1905 Quay Punt 'Curlew'.  After a working life in the Falmouth docks she became famous as her owners Tim and Pauline Carr travelled widely in her and for many years she was based in the icy Antarctic waters of South Georgia.  She is now owned by the museum and is kept in fine sailing condition. 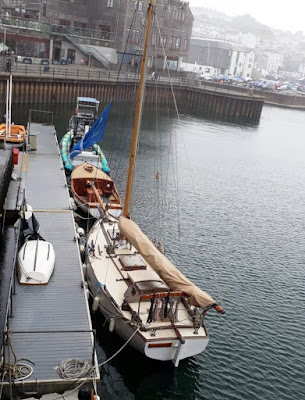 The picture below is of an exhibit in the museum that is perhaps appropriate for today - the little boat 'Father's Day'. This miniature boat is only 5ft 6in long and holds the record for being the smallest boat to cross the Atlantic. How you could store enough food for 3 months at sea, and why anyone would wish to inflict such discomfort on themselves can only be left to speculation. 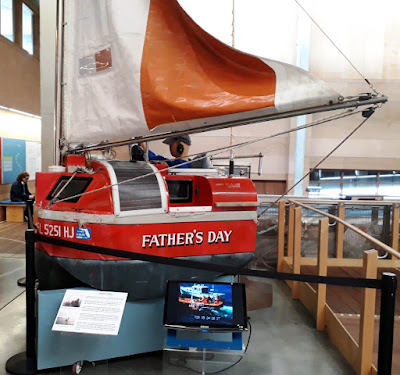 Although the rally is now over, D and I spent a jolly evening in a pub with 10 other Gaffers. In the next room was a party of shanty singers in Falmouth for the festival. We were interested to see that after a busy day of singing they unwind and relax - with more singing.
Posted by Bonita: Travels of a Victorian Yacht at 23:45