Justin and I came down to Lymington on Sunday night and left on Monday morning before the sun was up - at about 4.30.  The Solent seemed strangely quiet at that time.  There wasn't much wind but by using the tides of Anvil point and St Albans Head we managed to get to Portland Bill by the end of the tide.

The notorious Portland Race off the end of the Bill looks innocent and completely harmless at slack water.  We then had a slow and rather frustrating sail across Lyme Bay.  The forecast led us to believe we would have a brisk Northerly wind, but the wind was neither brisk nor Northerly.  We were also told we would have plenty of rain; this part of the forecast proved to be entirely correct.

The afternoon was brightened up by seeing several dolphins, and also the square rigged barque the Europa on her way to France.  Below is our view and a Wikimedia version. 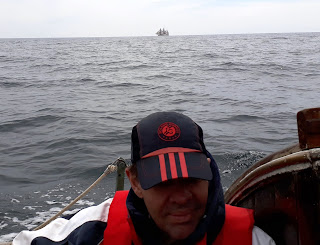 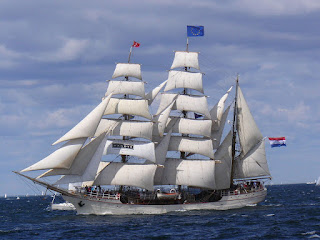 We entered Dartmouth after midnight in the rain and complete darkness, which is fairly stressful although the entrance is very well lit.  Our arrival at the visitors' pontoon was perhaps not as elegant as it might have been, but at least did not cause any damage or wake up any of the other visitors.

The only way to unwind after a difficult and stressful arrival in port is with a tin of beer, of which thankfully we have a small supply aboard. 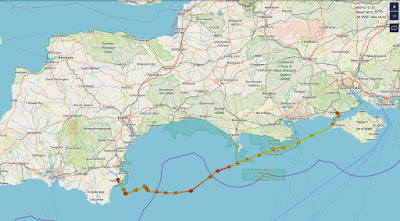 Posted by Bonita: Travels of a Victorian Yacht at 02:55