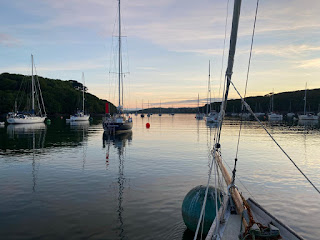 After Falmouth comes the Helford rally, and with Justin and D as crew we sailed to Helford on Monday. On a rare warm day with gentle breezes we anchored off Trebah beach, swam, and rowed ashore to visit the gardens and buy ice cream. On Tuesday we had  racing for the rally. With an easterly breeze making for an exciting start to windward in confined waters, we raced out into Falmouth Bay and back. This was followed by supper at the Port Navas yacht club. Susan J came second in her class: Bonita got the prize for having come the farthest ( by far).
The next morning D went ashore with Dave and Julie to go back to work by train. Justin and I set out to return up Channel. The pictures show a view of Helford river on a still evening, and D's photo of Bonita heading back east in the early morning. 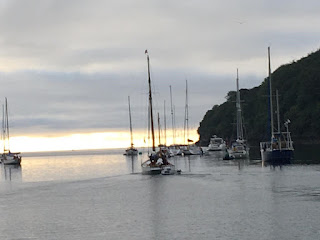 In a day of light winds we motored almost all the way to Start Point. We then had a reasonable fair wind overnight as far as Portland Bill which we passed about 8 miles off.
The waters around the Bill can be dangerous with strong tides. For centuries cargo boats under sail collected huge pieces of stone quarried at Portland for use in building works in London and elsewhere. Many must have got into trouble in these difficult waters. There are records of Sir Christopher Wren visiting Portland to sort out some of the problems with the supply of stone for St Pauls Cathedral. The stones were cut to shape at the quarry before being loaded into the ships, with only final finishing of the stone being carried out on site in London. There are records of some stones - and therefore presumably ships- failing to arrive but it's surprising that the system worked as well as it did though there must have been many frustrations. One ship with its cargo of masonry was captured by the French, who sold it on to the Dutch. The captain eventually paid up the price the Dutch demanded, and sailed her complete with cargo of stonework back to London.
After Portland Bill our wind died and we carried on under motor. Approaching the Isle of Wight I became concerned partly due to the met office forecast which referred to the possibility of strong NE winds ( the internet weather sites we looked at did not mention this), and partly because if the weather remained calm we might run short of fuel. We therefore headed north east at the Needles going inside the Isle of Wight. We passed Hurst point at the end of the east going tide, and berthed at Yarmouth in calm weather. I did wonder if we should have stayed out and carried on up Channel. However as compensation we were able to enjoy an excellent fish and chip supper in the Royal Solent yacht club. On Friday morning we woke to heavy rain and a strong NE wind, so we were grateful not to be out in open water. Sadly Justin who has been such an excellent crew on this trip has run out of time and returned to the mainland on the ferry. The next few days weather forecast looks unpromising so Bonita may be staying at Yarmouth for a little while.
Posted by Bonita: Travels of a Victorian Yacht at 13:22