The forecast is for strong Northerly winds over the whole of the British Isles. Billions of tons of cold air are moving relentlessly southward over a huge area for reasons we don't really understand and can't control. 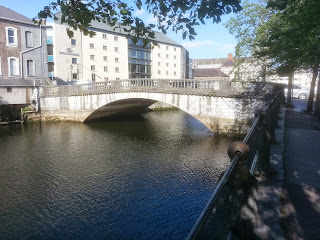 We decided to take the bus to Cork to see the sites and admire this lively city. The photo shows Parliament bridge, a stone bridge with a remarkably flat arch for the time it was built -1805.  Stone and brick bridges had been built with semicircular arches from at least the time of the Romans and it was only gradually that it was understood that flatter arches could be safe so long as the foundations were sound. This bridge takes motor traffic and was restored about 20 years ago.

Other highlights in Cork included the English market selling an enormous variety of food, and St Fin Barre's cathedral. St Fin Barre's belongs to the Anglican church of Ireland, which seems to continue to survive in a traditionally strongly Catholic country.
Posted by Bonita: Travels of a Victorian Yacht at 23:21