A day for recuperation for both gear and crew. Peggy, another Crossfields Morecambe Bay Prawner from 1910 is also here waiting better weather.

The picture shows the Torpoint ferry over the river Tamar. The new slipways are another elegant and effective engineering project from the office of our generous sponsors, the well known marine engineers Beckett Rankine.

As can be seen, this is a chain ferry, where the ferry pulls itself along by chains laid on the river bed. This is a simple and efficient system where conditions are suitable. Chain ferries however are treated with caution by yachtsmen due to their habit of abruptly starting out from the shore without apparent warning, and relentlessly pursuing their preordained course across the river at right angles to the flow of all other traffic. The fact that this is a triple chain ferry (apparently the only triple in the world) warrants even more caution. 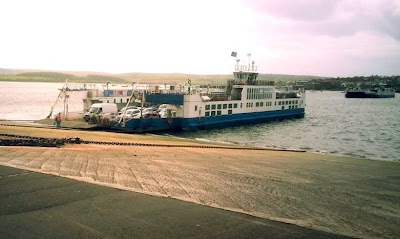 The river Tamar separates Devon from Cornwall and was through much of history such an effective barrier that Cornwall was almost an island, a culture that sometimes still has its echoes in attitudes today. Historically Cornwall did indeed have a degree of independence. It had wealth from highly profitable tin mines, a local legal structure, and in the days before modern roads communication was easier by sea with Brittany than by land with London. Now of course the tin is gone, or at least no longer economic. There is still agriculture and mining for china clay, but today the main industry, fed by this and other crossing points of the Tamar,  is tourism.
Posted by Bonita: Travels of a Victorian Yacht at 16:20