We left Whitby at about 7.30 this morning. The wind was a fairly gentle NE 3 - 4. I had heard that the entrance to Whitby could be dangerous in a NE wind but we were surprised how rough it was even in such moderate conditions. After clearing the rocks outside the harbour entrance we had a fine sail along the coast to Flamborough Head and around the corner to Bridlington. This is a tightly packed harbour that dries out so it is only accessible around high tide. We arrived about an hour before high water. 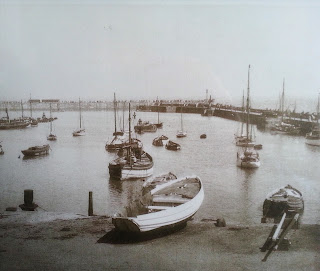 Bridlington has a special significance in Bonita's history; one which we have only recently appreciated. She was based here between 1907 and 1935, being owned by a succession of local yachtsmen. In 1935 she was moved down to the Thames estuary, and today was her first return to Bridlington in 78 years.

While she was based here all her owners were members of the Royal Yorkshire Yacht Club. The club members were out racing this evening but we later visited their busy clubhouse in the town and spoke to the Commodore, Steve Stanton.

Among the pictures on their walls is this general view of the harbour, obviously old but sadly undated. Bonita can be seen on a mooring: between the two boats pulled up on the beach, Bonita is the furthest of the two yachts with their sterns to the camera. As she has her dinghy astern her owner was probably aboard at the time. 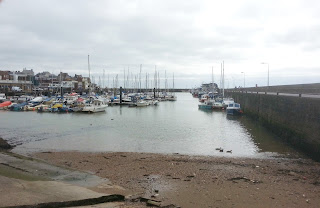 The second picture shows her tied to a pontoon in almost exactly the same position today although the photo could not be taken from the same angle as the original due to a building now being in the way. 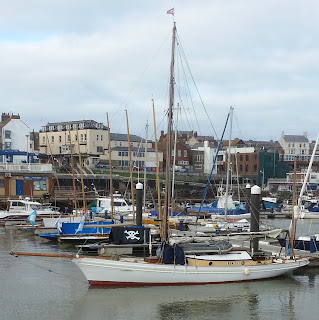 Posted by Bonita: Travels of a Victorian Yacht at 23:10