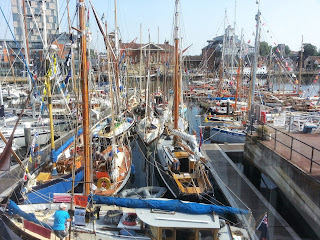 While the rest of the country seems to be on Heat Wave alert and suffering from Royal Baby fever,
the best place to be must be away from it all on the water.  Today we joined the East Coast gaffers jubilee cruise from Ipswich to Wrabness on the river Stour which divides Suffolk from Essex. The first picture shows the congestion of the massed gaffers in the dock at Ipswich. Bonita is in the centre of the picture and it took quite a while to extricate her.


We then had a light weather sail down the Orwell and up the Stour to Wrabness. After these exertions a swim in the river seemed a good idea. There isn't much at Wrabness apart from a few houses, yacht moorings and a beach, but that is more than sufficient for a gaffer gathering; there are more than 30 boats here anchored in the river and the crews have come ashore for some conviviality.

One of the impressive features of the Round Britain trip has been the number of Dutch boats taking part and the enthusiasm of their crews. The photos show the powerful and impressive Windbreker passing the Felixstowe container terminal, and the elegent Vlieter: built of riveted steel in 1946 and carefully restored to almost original condition.
Posted by Bonita: Travels of a Victorian Yacht at 22:38