A day in Grimsby doing odd jobs and awaiting crew due this evening. We spent the day alongside Minstrel whose friendly company we have enjoyed often since we first met in Stornoway.

The picture shows a traditional Humber trading vessel, the Humber Sloop in the dock at Grimsby. 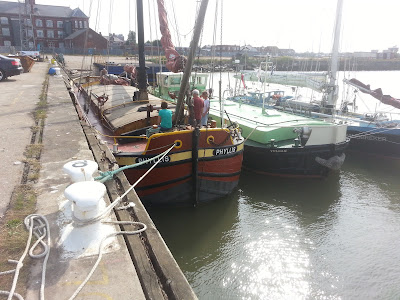 Humber Keels had square rig, and the Sloop was gaff fore-and-aft rigged but the hull is apparently the same. There were once hundreds of these vessels carrying cargoes up and down the Humber and beyond, but there are now only about ten under sail with some others surviving as houseboats. Phyllis is built of wrought iron: she dates from 1907 and has been carefully restored.

By comparison the more familiar Thames Sailing Barge seems much more streamlined, almost yacht-like. No doubt both types developed to suit the local demands of their trade.
The design of the Thames Barge was greatly improved by fierce competition in the annual Barge Matches. These were started in 1863 by Henry Dodd who had made a fortune out of transporting London's rubbish in barges and wanted, it is said, to give something back in return. Henry Dodd was a friend of Charles Dickens and the inspiration for the character Mr Boffin, a wealthy dustman, in Our Mutual Friend. I have seen a Keel under sail and they don't perform anything like as well as a Thames barge, so maybe they missed out in their evolution for the lack of a wealthy and sentimental dustman.

Several gaffers went out through the lock on this morning's tide and there is a group of us hoping to do the same tomorrow.
Posted by Bonita: Travels of a Victorian Yacht at 08:23